How Green Is Your Weed? Mass. Limits Energy Usage For Marijuana Growers 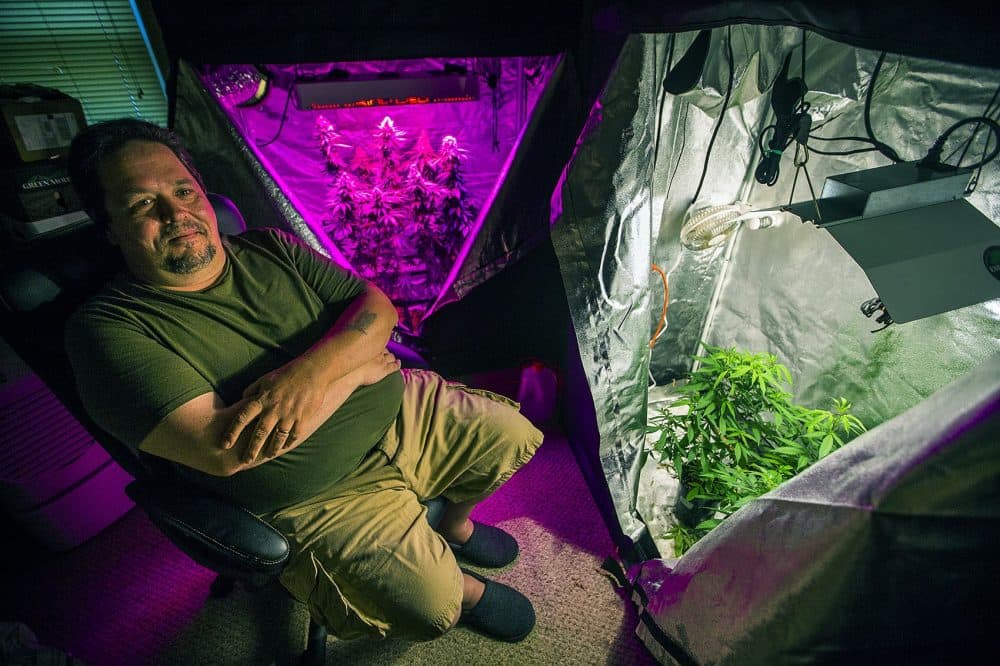 How Green Is Your Weed? Mass. Limits Energy Usage For Marijuana Growers

New regulations set strict limits on the amount of energy growers can use to raise their plants.

Massachusetts to limit energy use for cannabis cultivators - those growing over 10,000 sq. ft. are limited to 36 watts of power per sq. ft. of canopy. Those under 10,000 sq. ft. limited to 50 watts. One caveat being that growers can use as much electricity as they desire if they use 100% renewables. This is great for reducing greenhouse gas emissions but I’ve never seen restrictions so prescriptive in regards to energy use.

Sounds to me like Mass is pushing growers to either invest in LED lighting or renewables - which are great options, just a much higher initial investment than hid lighting.

I’d love to hear thoughts from @mastergrowers on this! Thanks!

Excellent topic! This is something growers have faced for years! Energy consumption!

Long before laws were being lifted, growing indoors with lighting has been troublesome. Aside from the known cost of electricity, it put you on the map for investigation. We all deal with climate control issues when growing, so those older HID type lights (HPS: High Pressure Sodium) were heat generators!

So, if you look at the overall topic of growing with lighting efficiently, you can see why LEDs have gained popularity!

While we are in a race for improved technology, there’s rapid advancements in lighting being made, as growers, we cant forget the applicable needs specifically in lighting. HID lights, such as CMH (Ceramic Metal Halide) are cost and energy efficient. Personally for me, it’s a great low energy use light, but I still have to supplement with different lighting. My choice, add on CoBs. A different LED.

Measuring your PAR and Spectrum needs, it easy to convert to newer more efficient lighting needs.

We have an indoor grow running that hopefully by the end of this fiscal year, the grow will be running 100% on solar energy alone!

We have an indoor grow running that hopefully by the end of this fiscal year, the grow will be running 100% on solar energy alone!

That’s awesome! I’m all about solar - have panels on my roof that I couldn’t be happier with!

And I agree there are some really sophisticated led lights on the market!

You need to get about 50 watts per sq ft with HPS to get the PAR in the range to be most effective. This does not include pumps, HVAC, dehumidifier, fans, etc.

I think high tech greenhouses are the way to go.

@mdrust is right about the 50 watts per sqf for lighting. A 1,000 Watt HPS will deliver around 1,800 µmol/s and 1,000 µmol/m²/s would be needed in case of CO2 supplementation. Based on thats we calculated with 60 watts per sqf…

With LED you would need 44 watts per sqf. 35 watts would be possible too but with a limited “blue-red” spectrum…

One caveat being that growers can use as much electricity as they desire if they use 100% renewables.

So I assume that in the US it is also possible to buy electricity 100% based on renewable sources. Another way would be to deploy a decentral combined heat and power station

So I assume that in the US it is also possible to buy electricity 100% based on renewable sources.

I thought that too before reading the article. It said, “off grid” renewable. Sounds like your own on-site green energy production…

The capitalist in me thinks it is draconian to single out a single industry, unless all high energy input industries are made to do the same thing. The list of those industries include, smelting/foundery, paper production, cement, fiber spinning, and many more. I don’t understand the fairness of such laws. For example, a Liquor Handlers license costs $20 and an Marijuana Worker Permit costs $100, but includes a background check. I can buy a firearm with a $10 background check. Why isn’t the MWP $30? Is there really $70 more work involved for the state when dealing with alcohol vs cannabis?

Takes a lot of investment to start your own power company. Lol

decentral combined heat and power station (CHP station) will produce the kWh for 3 - 4 cents and also provide some heat too. All the major greenhouse in Germany are deploying that technology. Used machines are affordable too

The capitalist in me thinks it is draconian to single out a single industry, unless all high energy input industries are made to do the same thing. The list of those industries include, smelting/foundery, paper production, cement, fiber spinning, and many more. I don’t understand the fairness of such laws

Totally! I thought the same thing. Data centers also come to mind as I often hear their energy use being comparable to cannabis cultivation. Cannabis is absolutely being singled out and is the ‘lowest hanging fruit’ if you will for taxation and regulation. There is no fairness in such laws!

Thanks all for your comments! I must admit going technical on the lighting spectrum and such is over my head so I need to do more research (always so much to learn). I really appreciate all the knowledge shared!

With Light deprivation you could turn 5 plus crops per year.

When you said you could grow with 35 watts per sq ft did that include the cast of HVAC etc?

These are good discussions. When I was in Northern California the big issue was the farmers who were tapping head waters and the devastating effects on wildlife down stream.

We need to utilize natural resources effectively and protect the environment. We are the “green industry” after all.

We as an industry will lead the way to amazing technology that will help feed the world. It’s already happening. Another positive effect of the green rush.

These are difficult perameters to work with in but if it can be done we can do it.

Dan, how many watts per sq ft does you outdoor farm use?

Dan, how many watts per sq ft does you outdoor farm use?

Around 29,000kWh per year. So 0.725kWh average across 40,000sqft of canopy. Peak is about 17kWh/h, the low is just my irrigation pump and security systems through summer at about 30kwh/mo average.

When you said you could grow with 35 watts per sq ft did that include the cast of HVAC etc?

I understand the 36 watts regulation to cover all power needs.

We need to utilize natural resources effectively and protect the environment. We are the “green industry” after all.

I totally agree! I think that in Boulder growers have to offset all of their electricity use with carbon credits or use renewables like solar. Def keeping it green in Boulder!

As an LED manufacturer we have been following the Massachusetts laws closely since they were released and while I applaud them for trying to make a positive impact it was done with poor information provided to the legislators who made the rules. I my opinion it would have made more sense to come up with a total number of watts allowed for a facility based on canopy. As it stands, a facility can buy incredibly efficient lights but buy inefficient cooling, dehumidifiers, etc. which would only offset the savings of the LEDs.

The specific section of the law pertaining to this thread is as follows:

We interpret this to mean you can use less in veg and more in flower, as long as you keep your total average at or below the requirement for your Tier. For example, if you were a Tier 1 grower with 10,000 square feet of canopy with 7,500 Flower and 2,500 veg you would be allowed a total of 360,000 watts for your lights. In reality you would likely run something like 40 watts per square foot in flower and 25 watts in veg with even lower levels in early stage plants.

A couple months back a test was set up with our lights over a 6X6 area simulating this very scenario. We usually like to see tests with higher light as we recommend in production environments but this test is all about how well our lights can do when you have a wattage limitation. We are definitely learning a good amount from the test and look forward to the results. Our goal is to till hit at least 75 grams per square foot, which would equate to 6 pounds of high quality flower off of the 6x6 space while running this low wattage.

Regardless of how our test turns out, this law is only the beginning of the future. California has a rule to test for mercury. How long until all the growers out there realize that one blown HPS bulb will mean the entire crop in that flower room is now garbage. And once they realize the possibility of losing hundreds of thousands of dollars to a single bulb failure, LEDs will look a lot less expensive as an insurance policy.

In case you are curios to see the test mentioned above, the picture below is at about week 6. 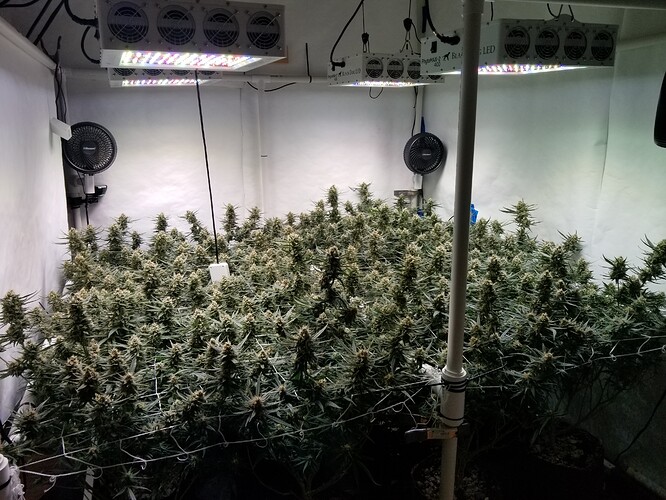 35 watts per sqf is just for the lighting with a limited blue-red spectrum. Taking into account that at least 50-60 percent of the electrical energy used by a lighting device will be turned into heat so HVAC will come on top!

So in the end it is possible to make some general statements about the consumption of the lighting but it is hard to do so for HVAC. Hopefully @CROPTIMIZE will provide some data about the HVAC

Have you reached your 75 grams per sqf goal yet??? And if yes, with which strain?

California has a rule to test for mercury. How long until all the growers out there realize that one blown HPS bulb will mean the entire crop in that flower room is now garbage.

But I do understand that your job is to promote your LED. But what the f*** are LED watts your company mentions at your website have you discovered a new physical unit!?

For LED it’s all about spectrum, light capture, and umol/J. Ideally, umol/J should be 2.0, give or take 10%. Any lower than that, the fixtures aren’t much more efficient than HPS (not considering heat)

As far as light capture, the less light hitting walls and floors means the more your plants are soaking up, so using distributed LED to get close to the plant canopy can be advantageous, especially when growing in aisles or stacks.

There are lots and lots of LED spectra out there, generally speaking many use narrowband diodes leave out greens, yellows, and IR, which plants respond very well to from wide spectra bulbs like CMH and HPS.

Certainly going to be interesting to see how this all shakes out for Massachusetts! We think it’s an exciting challenge for the industry.