New tent, office moved to other end of the coal room

And yeah that always sucks when you get bad seeds that don’t germinate. $100 bucks is a $100 bucks. What ya gonna do?

If it were me I would do two things. I would email ethos directly with my concerns, respectfully the first time. And I would contact the seed seller that I got them from.

I used to get my Ethos from Weed Gardian Family Tree seed vendor out of Colorado, they got really horrible on their service, the last order that I got which this was included in…it took them almost 3 months to get them to me, and nothing to do with the Post office or carrier. They play that game where you inquire with them, then they send you a email with a your order is shipped banner, and all they did was make a label in their shipping software and they haven’t really shipped it. I got pissed off the last time and called them and got a bit shitty to say the least, so I’m pretty sure my bridge s burned there lol. However in my defense, they lied, then called me 15 times one right after another while I was out with friends one evening around 8-9 pm here. I was nice at first but after the tenth call I told them to piss off. Leave me alone, that their phone calls had gotten to the point of harrassment. So no I don’t think they will replace any seeds lol. It’s their loss, I just won’t get any seeds from them ever again. At that juntion I had purchased over $600 worth of seeds from them. I don’t reward assholes.

Hey sport, that absolutely sucks…
Another thing you might consider (and I feel you’re totally justified) is start a new topic here on GN .
At least that would warn all members here and perhaps the word will spread…IMHO that is just CHICKENSHIT… wouldn’t cost them a damn thing to replace your seeds and make sure you’re a satisfied customer…Obviously they’re only interested in the MONEY and that pisses me off…LOL and I’m not even involved!!!

Turns out that sickly looking yellow one only has one colytdon seed leaf, definetely bad seeds.

Well it looks like I finally have 5 live ones. One of the three in the pictures posted earlier died as well. Two are still growing, the yellow one has turned green and looks like it may put out two true leaves, the coltydons were mutated with only one on that seedling. Here is a pic of this morning 15 seeds later lol…anyway the one on the left is going to come up, it had a chunk of soil pushed up, but I watered this morning so it melted that piece of worm casting back onto and covered up the sprout pushing up. I put in 4 OKC R1’s and looks like they are all going to come up. Really dissapointed with the 10th planet seeds. 2 out of 10 sucks. 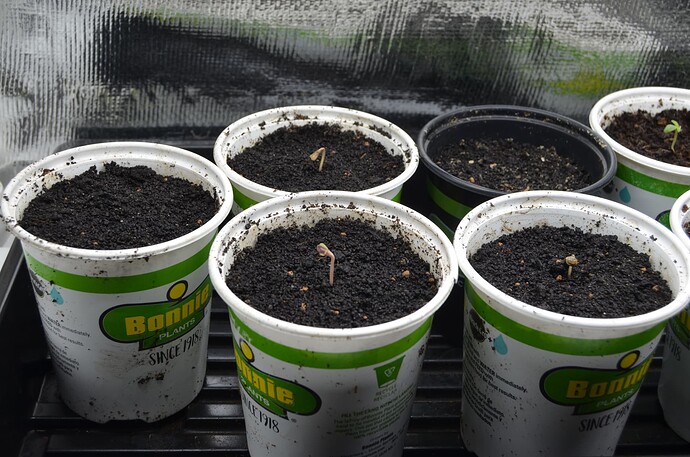 Woo Hoo, well this morning the last of the OKC R1’s popped out of the ground. The other three cups hold the remains of the 10th planet seeds that didn’t pop. Got a Doc appointment this morning, so will be fiddling with them and dumping out the non-sprouting cups. These OKC R1 girls are all a purple color coming out of the soil…I like that lol !! So I wonder has anyone grown both these strains, and if so which is the best? The OKC or the 10th planet. Reason I ask is I now have 6 up, but only plan on putting in 5 that will give me a good floor plan/spacing in the 5x5 tent. Would rather keep the best of the two strains, the little brosures that come with them read almost identical. 30+ THC for both.

Thanks to anyone who can chime in.

You could always just put six of them in the tent see which five do the best and just cull the weakest one. The two strains will probably both be fairly similar.

I hate that you had bad luck with your seeds, but it’s a little reassuring that I’m not the only one having a tough time with an ethos strain. I have an ethos auto going that I just can’t please. She’s been unhappy from the get. Still unhappy in early flower, but frosty as hell despite being unhappy and having a light fall on her.

Yeah sorry to hear you are having problems with them also! Mine are all photos, there is no doubt that they are picking the seeds too early, when seeds are all white, they haven’t been left on the plant until they are mature, inmature seeds haven’t finished their genetic programming so they just don’t grow right. The OKC all came up and are doing fine, they were also pretty pale, but not as bad as the 10th planet. When the only thing you sell is seeds and you sell inmature ones, youre gonna piss people off with bad germ rates. Like I said a couple of years ago I got my first Ethos, GG4, Mandarin cookies and another one I can’t recall the name of. They were all of good color and all germinated just fine. Still have some of them, All the seed I bought in the last batch and all shipped the same time were all pale as ghosts. I don’t think that is a coincendence.

All the seed I bought in the last batch and all shipped the same time were all pale as ghosts.

I don’t know why breeders take this chance. I’m a little at home nobody when it comes to breeding, but I won’t even send freebies of my gear that don’t have good stripes…

they can’t breathe dude!!
But in all seriousness you said some of the seeds were older so after a year or 2 you can’t really be too judgemental I think. I know I can’t pop old seeds for shit & I’m happy to write them off. Well not happy but you dig!! That’s just me throwing the flip side of the debate though, not for nothing sort of deal as I see it. But it looks like you got something green working up now so off to the races sport.
Oh I’ve been meaning to ask you? With sport in your username - you have to follow some teams I’d imagine?

No not at all, I quite frankly hate sports, NEVER watch them on the tube. If I turn on the TV on the weekend and it is sports, sports, sports, the remote gets the off button. Now on the seeds they were less than a year old, so that is not it. They were just piss poor seeds. I have seeds that are 20 years old and sprouting just fine. The sports in my logo name is from when I owned my own company, the sssportsmfg stands for Silver Streak Sports Mfg. I made medical emergency rescue equiptment, then I made police equiptment, the sports part came from a failed (first) endevor that had to do with outdoor patio equiptment. Since I had the name, and the LLC and all the legal stuff done, I just moved on from the failed endevor to ones that were lucretive. The sports part was about outdoor leisure equiptment, not about sports as in playing football. Yeah I probably did make them sick lol. But all is better now…only the strong survive.

Yeah Happy as sickly as the two 10th Planets are, I will pot all of them and see what shakes out. I have had runts turn into exceptional plants, and have had plants that came up like gangbusters, turn into sickly plants, I have the room so might as well just put all six in and get rid of the unhealthist one of them as they get some size on them.

Just putting this up as a helpful link for those of you who like I plant by the moon phases. If you don’t you are missing the ability to enhance your germination and healthy sprout percentages. It really does work. Anyway here it is, forgot to post this on many occations, but it reminded me when this last batch had such a poor germination rate, and yes I did plant them by the moon phase. These were just poor seeds, like they say you can’t make a silk purse out of a sow’s ear.

And a daylight chart

Hope this helps a little.

Well that’s false advertising brudda. LoL hey sport I’m gonna dm ya with a question since you had a company in manufacturing. I wanna do some brain picking!

Well the two 10th Planets are just sitting there doing next to nothing. (see picture) 10th is on the right. REALLY PISS POOR SEEDS. The OKC strain which is a week and a half behind the 10th Planet has already surpassed them and so this morning I put two more seed in water to germinate. I don’t think the 10th Planet will ever do anything.

On another note, got myself a new toy. (see picture) 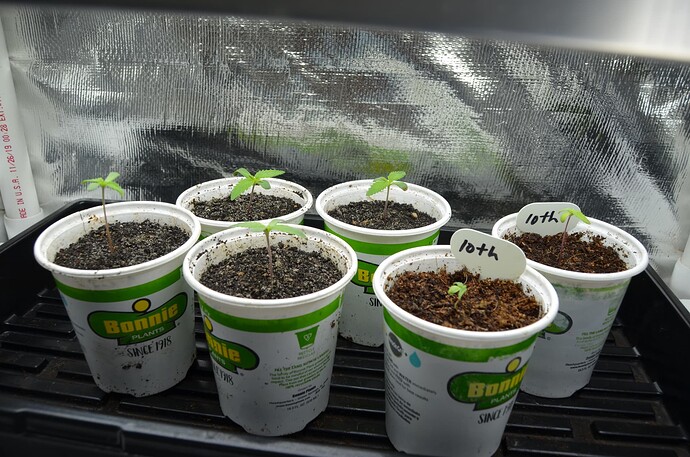 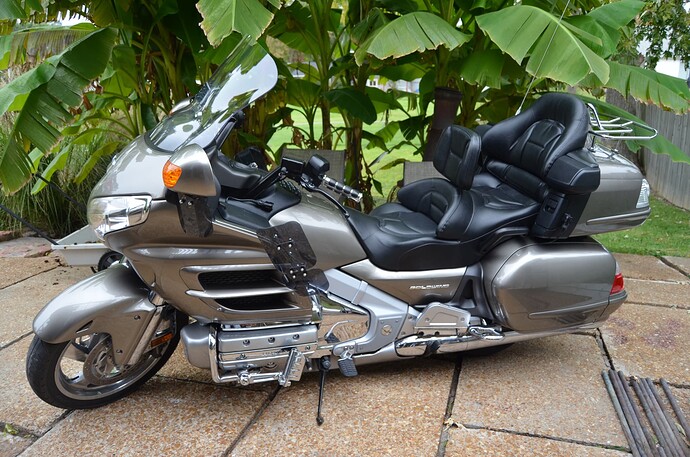 DANG Sport!!! That thing’s a cadallac !

Looks like a land cruiser…is that the mini frige/microwave behind the rear seat???

Bet the ride is smooth as glass…Good for You, everyone deserves a new toy once in awhile!!

Is that thing turbocharged?
I friggin new it man… You weren’t around for a while. U pulled one over on life Insurance didn’t ya? I’m not sure if coming back here is a good idea man. They may trace you? I know we are hard to resist and all but you need to think smart about this Sport.

na just normally asperated…hey is that a word? Nope cashed in some stocks. From what I heard coming back here might have not been a good idea period lol.