Good evening! I was wondering if anyone would be willing to share ideas on how to install my trellis netting. I’ve made things with PVC and wood in the past, but I’m open to new ideas. I’ve got 4’ wide netting currently. I’ve attached a picture of my smallest flower room and in the end they’ll all look like this. 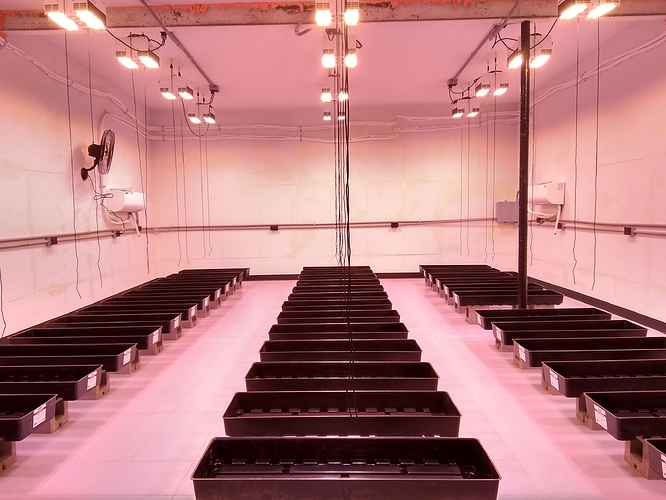 The trellis supports are usually built into the tray stands. Looks like you have plenty of height to accommodate them.

What is your wall covering?

Hope it was pre-sanded!

I presume the medical grade paint has anti-microbial properties. Is it an epoxy?, will it allow you to bleach down the walls?

Presanded of course lol. It’s a latex so I can clean it up pretty well if needed.

I can tell you that I have used Hemp Shield Wood Finish & Deck Sealer Clear to keep all my untreated wood from hiding Flowery Mold Spores for years in my grow room after one coat! www.hempshield.net

First, my personal preference looking at this room would be to use PVC to hold my netting that also acted as the manifold for my drip system [and to lay shade cloth over if need be - using PVC pipes for the ends so it rolls up like a scroll]. I would use clips to hold the “netting board” that has the net inside / stretched on a separate PVC [or other material] frame [which will add extra strength on top of getting rid of a lot of what makes a net annoying. It also, I think, makes it easier to clean and it isn’t being rolled up or tossed to the side to trip on - you can just lay it up against a wall]. This will also prevent the need to apply tension to the manifold / supporting structure that would be applied if the net was stretched between it [so make the frame for the net really rigid with no bends in it].

Hi, Can you please send a picture if possible of your explanation. Sounds interesting and I am in the same boat. Thanks, Kevin

I don’t have a picture exactly [not of the one I used] but a lot of the parts can be found premade on Amazon, Drip Depot, Drip Works, etc. I am sure I can find a picture of a PVC manifold. Picture what you find in your aeroponic cloner just bigger and running lines [from drip manifolds] as opposed to misters. I used one at a collective built exactly this way. It ran from the reservoir to the manifold using standard hose and standard threaded PVC hose fittings. It used basic PVC valves to direct water to different sections independently [and I like the solid nature of those valves]. In the case of the above room, as opposed to the square canopy it was used for, picture it as being built like a ladder on the ground [down and between the tables]. That system [at the collective] wasn’t as well thought out for the addition of the netting. It also lacked an escape valve.

The trick is to keep the weight on the ground usually. So the manifold wraps around everything on the floor and the support structure for the netting is built up using snap saddles or slip passes for this design. Stability is better if the top is wider than the bottom so the posts are slightly angled [so the frame for the net is wider than the manifold]. You can use PVC snap clamps to provide feet under the manifold [to stop bowing as it pushes down from the joints] in spots it sags.

The ‘netting board’ is just a name I gave to the method of pre stretching the net out in a frame [because I am not sure if there is a technical name for doing it I would recognize]. You can use tomato clips around the PVC to hold the net, etc [they fit well - like little PVC clamps]. If there is enough tension it will bend the PVC frame so picture the frame as being a bit of a ladder too [crossbars] if you want the net super tight.

So picture the manifold on the ground, posts that snap on / push in, and a net [inside a PVC frame] that attaches to the posts using slip passes or snap , so the entire thing can be broken down - that makes alignment easy and also prevents needing to mess with three way connectors in the corners of the manifold to set posts - since water will just go that way too or angle will be restricted to the width of the net frame. There are different ways to do it, but since it is on the ground, you want an ‘escape valve’ that you can use to flush the system out [since gravity won’t empty it] if need be - so end with a T and a valve that can be opened to flush the system out - water enters the system the same way on the other end. I would attach a hose at the flush end and run it through the wall for disposal.

There are lots of supplies for ag out there for PVC irrigation so I am sure someone can get as fancy as they want - no different than a flexible hose system [and you can attach flexible hose items to rigid PVC - I swear there is a way to connect anything]. In this case [the one I was using] 5 way and 4 way PVC connectors were used with drip manifolds on top [so its like setting up a rigid sprinkler system]. In this case it would just be a three way. I’m sure it could be done other ways, like putting holes down the PVC, but that is likely not the best way to go if you can avoid it, you can think of that as not any different than punching your lines. In terms of the room shown above - I would put the drip manifolds between each row, one serving each tray or the tray on either side of it, and that would keep them out of sight and out of the way [drip manifolds come in different configurations with different features]. I would use a nice drip manifold that has pressure settings.

I will dig for a photo of what it looked like but I really don’t think I have one anymore. That was many cell phones and HD’s ago. I think that [the above] is pretty descriptive though.

So think of the manifold and the net structure as two different pieces that come together to form one unit. I think the economy of the materials, etc, would compliment the room [it has a modern, minimalist, economy of materials feel to it]. We used PVC to make fabric beds at another operation and used those frames to support the nets using tomato clips but I wanted to use seperate frames like i did in a home grow situation I had [breeding] but my partners didn’t want to buy the extra PVC. I made a similar system inside of a 4x8 flood tray using PVC to frame plastic [to act as a large dome] so I see PVC is fun and handy for all kinds of things. As another example it works well [with some holes in it] to blow air up from under / inside a crowded canopy [often with a vacuum created above it] and in trials [I think it was a Botanicare experiment on this one] doing so had pest management properties [of course] but notably disrupted the life cycle of Spider Mites.

Thanks, Dave! I’m going to give your idea some thought for sure. I’ve got a week to figure this out. I’ll update you folks when I’ve got it all put together.

I would be honored if you used it