As this year there was no march, here are some photos of last year’s in Quito, Ecuador. In the first photo is me with hat & sunglasses and my son with green/white cap.

Lovely pictures and a great turnout you had there, and super to see your son in the mix, in the front walking in his fathers footsteps.

IN South Africa we have been organising the GMM or just over 15 years, its slowly started gaining momentum and now it takes place in 3 cities and thousands attend.

I was very fortunate to meet the “yippie” that originally organised this event many moons ago, Dana Beal. What a legendary old man. After having a joint of outdoor grown swazi in a rehab centre, we went for a steak, he flew back to the US and got arrested that week for dealing in marijuana. The newspaper report was insane, here is an insert.

"Irvin Dana Beal, 70, of New York, was arrested Saturday in far Northern California after prosecutors said his rental car was spotted weaving across the road and driving 20 miles below the speed limit. " Full article 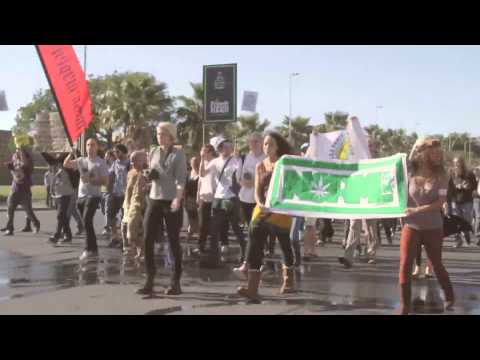 Wow, what a turnout, pictures like this brings tears to my eye’s.

I bet, if it was held this year it would have been bigger.

Good luck to you all in Ecuador.

I remember when that happened, I never met or knew the man, but he is legend all across the globe.

Thanks for that piece of history @chrisj ! Just read Dana Beal’s history and is amazing. Pioneers and actvisits of cannabis are now left behind big corporations who exploit people and resources. That is why in Ecuador we are fighting for a ban to big corporations for at least 5 years were only cooperatives, farmer’s asociations and non profit ONGs can access to licenses and permits. Cannabis in Ecuador is a new industry and it must not make the same sins that all the industries have done.

Flower to the people!

Thanks @piper! I quit my job to dedicate all my time and effort to the Cannabis community.

Greetings from the middle of the world.

Flower to the people, its as simple as that. Yes Dana is very much against “babylon” and capitalism, hence called a Yippie. I hear you about big business, a problem we facing in South Africa to. I have access to an amazing book, published by people from around the world, specifically for giving cannabis back to the people. Was actually in the room of a wonderful couple and other affiliates while they were typing up this latest edition. The South African government is using it as a framework because it includes all members of society, including the rural subsistence farmers.

I am happy to send you one for your interest and reading. It might give you some great ideas. Pop some seeds in to. Peace.

I remember when that happened, I never met or knew the man, but he is legend all across the globe.

Meeting him in person is very different. The white hair, big mustache that covers his mouth and he always wears his cowboy boots on the outside. Forget to mention that star in his eye. A natural born leader he is and still going strong. He is more an activist for a plant called Ibogaine, something from South America, which i am sure you are familiar with?

Exquisite! I will enjoy it! Both things!

Ibogaine comes from the Iboga tree: The Iboga tree is central to the Bwiti spiritual practices in West-Central Africa, mainly Gabon, Cameroon and the Republic of the Congo, where the alkaloid-containing roots or bark are used in various ceremonies to create a near-death experience. Iboga is taken in massive doses by initiates of this spiritual practice, and on a more regular basis is eaten in smaller doses in connection with rituals and tribal dances performed at night. Bwitists have been subject to persecution by Catholic missi In...

Never heard of it in the Americas.

San Pedro cactus (Echinopsis pachanoi) is traditionally used for shamanic ceremonies along all the Andes, it contains 2-8% of Mescaline. In the Amazon rain forest, Ayahuasca (from the Yage tree, Banisteriopsis caapi) is used for ceremonies, it contains DMT.
We also have Guanto (Brugmansia arborea), Chamico (Datura stramonium) wich contains escopolamine and hiosciamine.

I wanted to make Ayahuasca ceremony this year but… nature told me to wait a couple of years.

And you need to listen to nature. Sorry I was confusing Ayahuasca with Iboga. Thanks for clearing that up and correcting me. We have a South American shaman that comes to SA every few years to run ceremonies at a friends place with a sweat lodge. They have a greenhouse of san pedro dedicated to him, 40 metres of thousands of san pedros.

I arrived at my abandoned plot of land just over 10 years ago. It was a drug rehabilitation centre for a number of years and then became the place where you could purchase any drugs. The place got over run with ex-convicts and eventually was run into the ground. No elect, no water, no keys. I also brought about 3 varities of san pedro here.

This the original mother plants, they have grown to about 5 metres in length.

And then my best is the entrance to my home, put a front door in and lined the walkway with san pedro. They really do grow well around here.

I also have an interesting slow growing variety, the penis head san pedro.

Beautiful pictures!
I have a small San Pedro, about 3 years old, who has a baby San Pedro. I live in Riobamba, in the ecuadorean highlands at 2700 meters above the sea level, about 12°C average, so, it grows sloooooooooooow. 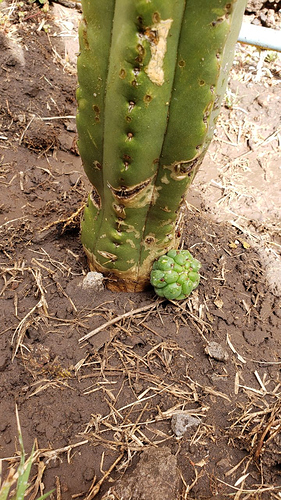