That was a very expensive light to use. Why not just a normal CFL ?

Because of the fact specimen was lacking pigment I wanted to give it something that would provide a holistic spectrum fit to nourish a living creature…
It’s also shelling 15k + lux and not hot at all!!

Sje just broke soil and is yellow/white looks sun starved i mixed a half gallon of a.n. base at 1 ml per liter and a lil growers choice mycoblast for all the seedlings a couple seemed to have stalled and that one was funky that was last night around 530pm they were all visibly greener and bigger in a matter of 12 hours i guess il be feeding my seedlings a bit earlier from here on out usually wait til cots yellow…

Hey mon!! That’s good advice, still waiting from the last feeding as it seems to have stalled. Not sure if got injured when I removed the shell. There seems to be more of the shell membrane attached but don’t want to mess with it! Just caress it a bit to check if it’s alive…
Will probably give some superthrive at a very diluted concentration later…
Also starting to show signs of purple…could be the stress or the genetics…

Keep an eye on it looks like it’s damping off…

Hey mon, I noticed that…it’s been in a hell of a transplant shock that’s for sure!!

Will keep an eye on it closely!

Here’s another experiment that’s going on!

It’s also a freak seedling that is being trained to grow in the japanese style of “Sekijoju” root on a rock! 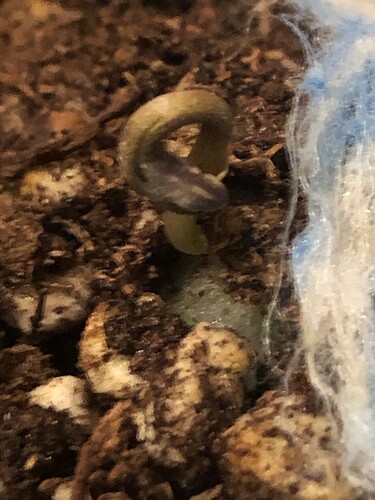 It’s quite the opposite from the Albine aka Scotty. This one is a dark purple very swan beaked. It’s tap root has anchored on a chunk of crystal. The roots will slowly be Uncovered and the rock will revealed !! 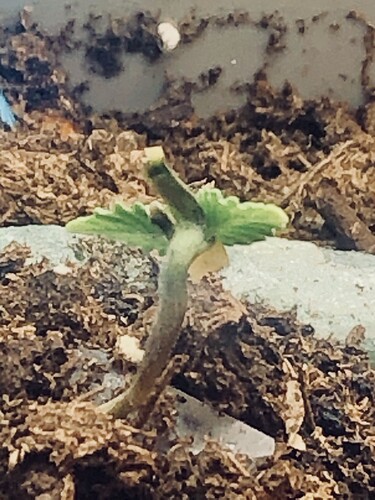 It’s perked back and was able to cover the base to keep warm as it appeared damp.
The Okinawa sugar replenished some chlorophyll and pigment somehow.
Yesterday, it received superthrive, great white and roots Surge.

It appears to be pitched sideways due to the fact it was Injured or unable to seek light when it was in the jaundice like state.

The reptileglo light also really made a rapid improvement! 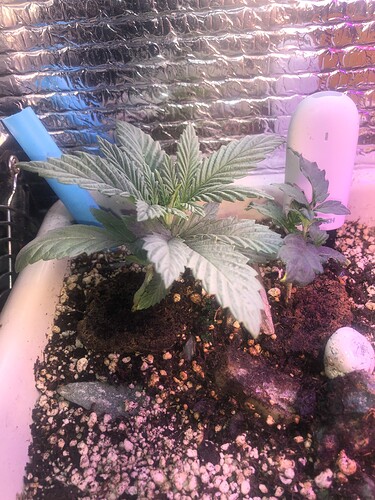