Sweet! I’ve been looking forward to it. I have been debating on just saying fuck it and buying some but this should do help me decide… and that’s how they get you! Lol

https://challenge.bovedainc.com/savetheterps I googled it and another thread here on GN came up and had a link I just applied and should be notified in 4 to 6 weeks

I had identical results with both test tubs when it comes to the aroma before grinding it up and after grinding it up. Before grind it was kinda veggie but you could tell there was something there. The after grind released a pungent sweet and gassy aroma punching you in the nose. I then loaded two new clean pipes. Took a rip off the first pipe with the boveda cure and had a little cough but was left with a pleasent after taste. I then chilled for a few minutes and drank about a half glass of water and let the effects settle in till I was ready for the second non boveda cure. I took a rip and was able to hold it in for a few but didn’t cough. It seamed to have a slightly better taste and just a little smoother. The texture and moistness of the flower had the biggest difference. The non boveda was dryer and stems snapped. The flower has a consistent dryness with a slight crunch without breaking any calyx or leaves off. The boveda cure has more moisture and the center was noticeably stickier.
My over all thought is that this product would be good for long term bud storage. I don’t think 2 weeks of cure is long enough to justify the product. Maybe a month would be more sufficient and have some better results. But in my overall opinion for 2 weeks I personally liked the non cure taste. That’s one thing I look for in a good smoke and if it doesn’t have the good taste then I may not be a fan. #bovedachallange @bovedacannabis 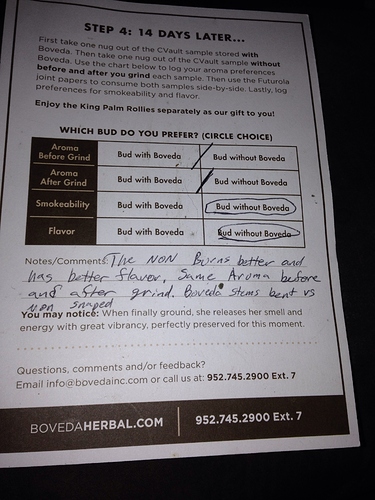