Does anyone here use a refractometer to measure dissolved solids?

Here is today’s levels on a cool overcast day. Pretty good for the weather. From what I understand, anything over 12% is good and peak performance is something like 22-24%. I have also read that a blurred line is ideal, it indicates plenty of minerals, where as a sharp line indicates deficiency. 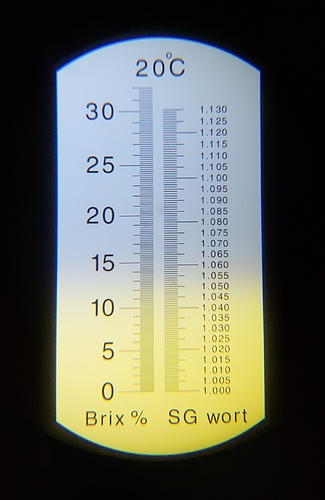 Not to say that it has to be used for sugar, of course, just that I’ve only used it that way.

Yes, mostly it is measuring sugar, but from what I understand it can subjectively measure a mineral component as well. A sharp line shows sugar with reduced mineral content (usually calcium), and a blurred line is showing some high mineral content.

It’s a subjective measure of plant health. With high sugar and mineral content being a good sign of optimal health, though environment does play a role. For example overcast will show lower readings than full sun.

I use this as relative measure of health. I find it useful for testing new supplement products. If you measure for a base reading, spray/water a supplement, wait an hour, and then take another reading, I think it can help determine if that product is producing a positive, negative, or null effect. I also think it help check for adequate nutrition and catching deficiencies before they are visible a problem.

I was wondering if anyone else uses brix in this way.

How are you taking the measurements?

I get that. How are you getting the liquid?

I collect fullly sun exposed leaves and tops and place those into a ziploc or similar bag and beat it for 1 minute with a hammer. I poke a small hole into the bag and squeeze out 2 or 3 drops on to the refractometer lense.

For those who are unfamiliar with refractometers, you can get an optical one for about $20, a digital one for $120, or a high quality lab one for a few thousand (as these things often go).

The digital ones won’t show you the nice gradient Dan has here, but they do auto-compensate for temperature and are generally easier to use and interpret.

I might have to get a digital one to go along with the analog one!

Try contacting Hach. They are industrial and industry leaders in this respect.

Try using a flashlight if diffused light is an issue.
My understanding is the wavy line is the result of either insoluble solids distorting the light or lack of homogeneity in the sample. Refractometers aren’t calibrated for ‘salts’ which form ionic species in solution.

Your sample is going to vary according to where the juice is sampled from.
Too much stem will show higher salts, Ca, no3 and lower carbs.
While more leaf, growing tips and petioles will show higher sugars, nh4, Mg and N.

You are better off measuring no3 with a leaf meter for general health and just watch for deficiency symptoms for Ca, and Mg. Both of these can be corrected overnight and are generally included in midseason fertilizers in proflatic ppm.

I don’t think refractomters are calibatrated in any other way other than putting a scale on the lens. I double checked and they measure total soluble solids (sugars, protein, and salts for the most part).

It is definitely a subjective measure, but overall more is good and less is bad. Very basic, cheap and useful none-the-less. It’s important to measure the same par of the plant everytime. I measure from the 3rd leaf down from the growth tip.

I took a look at nitrate sensors. Seems like a good idea, but they too seem far from exact, at least the reviews would seem to indicate a wide range of variability in readings, even with the same sample. Calibration seems to be difficult. They appear to be either a membrane based or EC based field test, both have their benefits and drawbacks, neither seem particularly accurate.

Is there one of these that you have used and found to be more accurate/useful?

My refractometer was $20 and gives me a general sense of plant health. A nitrate sensor costs a few hundred dollars for a somewhat less subjective measurement.

An actual lab test would be nice, but is not currently possible. The Liquor Control Commision wouldn’t be happy with me if I ‘diverted’ ‘consumable marijuana’ to an ‘unlicensed lab’. It would be nice if the licensed labs would do some of these other agronomic tests, but their bread and butter is pesticide and potency testing.

Nice! I suppose that works if a blender isn’t handy.

I had never thought of using brix to measure leaf health before this thread. I’ll give it a shot.

I’ve used brix extensively in food processing, but only as a measure of dissolved sugar solids. Most fruits are in the 10-15% range. Most processed or canned fruits are in the 60% range (when packed in liquid) or 80% range (when not in liquid). Indeed, higher brix food is better preserved. In this case, the preservation is by reduction of water activity levels - there is less free water available for bacteria or yeast if it is packed full of sugar.

How are you using it here? Are you measuring the liquid in the plant or in the water you’re fertigating with? If the latter, why not just use electrical conductivity?