Combined sales for California’s medical dispensaries and delivery services were $233 million in November 2017, a five percent seasonal decline from October. Between March 2017 when reporting began and November, nearly $2.1 billion in retail activity has been recorded in California dispensaries.

November sales in the Northern half of the state were $93 million, a five percent decline from October. Similarly, sales in the Southern half of the state also declined five percent, hitting $140 million.
The sales of flower/bud generated $114 million for the month and contributed 49 percent of total revenues for the market. Compared to October, the category lost eight percent in sales.

Topicals remain a small category with less than $3 million in sales for the month of November. The category is noteworthy though, as sales continue to grow month over month. From October to November, topical sales increased nearly 10 percent.

Just a thought, but maybe being able to add tables in the forum might help minimize the eye damage of the data

You guys are the best!

@Jordan let’s look for a plug-in for tables. If we cannot find one, we could always build one!

Just a thought, but maybe being able to add tables in the forum might help minimize the eye damage of the data

You guys are the best!

Alright Dawne @Proteus420 , we found a workaround here until we can find a more convenient solution (and a huge shout out to @timM for helping find the temporary fix!)

If you go to this link here, you should see a screen that looks like this. 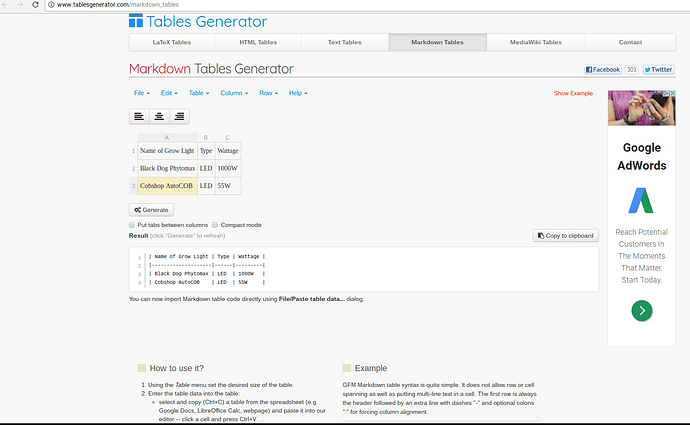 It’s not the prettiest thing to play with but you can create a new table with your own set columns and rows and you double click on the fields to enter the data. When you’re done, copy to clipboard and just paste the whole thing in the post/topic you are wanting the table.

Here’s a screenshot of the actual post I’m writing:

And now when I reply? It shows up much nicer looking!

Let me know if you have questions on the process, would be more than happy to help. We’ll see if we can implement something like this into the software we use too to make it more intuitive and easier for all members to do!