Cannabis Carl has agreed to take questions on IRC Sec. 280E and share them with the aBIZinaBOX team. If you don’t know who Cannabis Carl is…this ought to help. 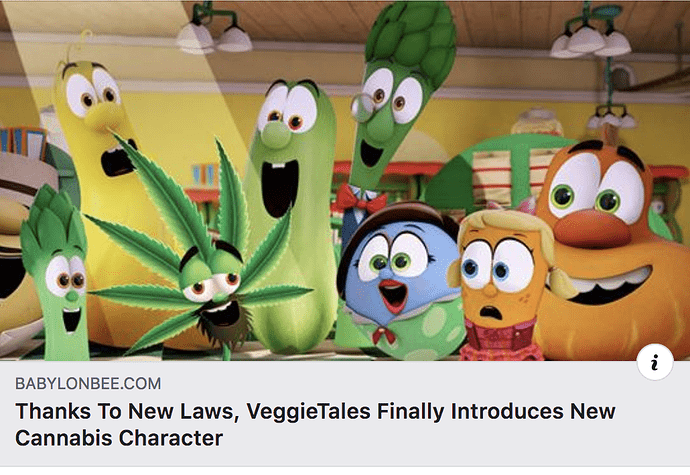 The basic story is…VeggieTales creators are celebrating the legalization of recreational cannabis use with a new character, Cannabis Carl. The character is a sign of the progress the United States has made on its views on the controversial plant. “Kids are ready for this,” said Dreamworks executive Brian Jones, who is overseeing production on the current series.

In his inaugural episode, Cannabis Carl will be at the border to the VeggieTales house property, trying to cross over to start a new life, only to be met by Pa Grape who is out patrolling for illegal vegetables. After Pa Grape puts Carl in custody for being an illegal plant, Mayor Archibald passes a new law that Cannabis Carl is a legal citizen. Carl is welcomed by the Veggie Cast as they sing a song about old laws and new covenants, drawing a powerful parallel from scripture that is easy for kids to understand. As the episode ends, Cannabis Carl helps Mayor Archibald cure glaucoma in his right eye and ends up becoming roommates with Mr. Lunt, buying snacks at Pa Grape’s store and living off of the town’s generous food stamp program.

“Mike and I have had this character in our back pockets since college,” Phil Vischer said at a press conference. “America wasn’t ready for Cannabis Carl then, but they’ve finally come around.” Mike Nawrocki, the voice of Larry the Cucumber also commented with a long, drawn-out, high-pitched giggle. His eyes appeared red.

Vischer and Narwocki say they have more characters in store for when all drugs become legalized, including a wizard mushroom named Morlock. “Bible college was a pretty crazy time for us, but eventually God uses all things to his glory,” Vischer said.

The new episode featuring Cannabis Carl will be released on the newest Netfix VeggieTales series titled “VeggieTales In the Haze.” Cannabis Carl will debut with his song “God Made All The Plants, Dude” and will be voiced by actor and director Kevin Smith, who is a devout Christian. [Source: https://babylonbee.com/news/thanks-to-new-laws-veggietales-finally-introduces-new-cannabis-character/}

aBIZinaBOX strongly supports Cannabis Carl and The Veggie Tales and the distinguish themselves from all of the fruits…carry on.