Hello Everybody,
I’m about to challenge the constant winter white powdery mildew,
Do someone use copper sulphate ?You know the classic blue/green agricoltural anti-mildew but as well anti-manything as spray.
The use of this element in commercial vegetables its really wide.
I use it regularly on tomato, squash,strawberry …etc etc
It’s used as an integration of sulphur (and every signal indicate I need some),as antibacterial. nothing to say works great in the garden
It’s almost armless for humans ,and of course I could just use it in vegetative stage,

There’s something wrong about it during veg??

If someone know more pls advise ,
Thanks a lot

I have used dusting copper sulphate on plants with powdery mildew before. I dont think its a problem to use on vegging plants, but once mixed with water it can reduce beneficial bacteria. Was that your question?

Thanks Chris ,
Specifically my question was:

Why really few people use it ? Cause it’s something really powerful against mildew , everywhere in the world for almost every vegetables …
I was wondering if there are any bad consequences in terms of toxicity , I mean , we are going to smoke that shit ?

But I’m also of the opinion that in veg stage , shouldn’t affect the flowering stage, and should be expired already …
Just looking for a confirmation from the community

Attached the pics of what I’m talking about , I’m from Europe so perhaps we have different agricultural system

I could be wrong but smoking copper seems bad to me…

I think it is quite widely used for sorting out powdery mildew, snails and slugs. Been reading this article to learn more about the compound.

" Copper sulfate is an inorganic compound that combines sulfur with copper. It can kill bacteria, algae, roots, plants, snails, and fungi. The toxicity of copper sulfate depends on the copper content.

You can be exposed if you are applying copper sulfate and you get it on your skin, breathe it in, or accidentally eat or drink a product. This can also happen if you get some on your hands and eat or smoke without washing your hands first. " Source

Seems like can it can cause alot of issues ( Eating large amounts of copper sulfate can lead to nausea, vomiting, and damage to body tissues, blood cells, the liver, and kidneys. With extreme exposures, shock and death can occur.) and possibly lead to kidney cancer with longterm over exposure to it.

Because its water soluble and if applied to plants in vegging stage of growth, it should not be present when harvest season comes as its leached into the soil.

Attached the pics of what I’m talking about , I’m from Europe so perhaps we have different agricultural system

I am in the frontier country where Europeans arrived as a buffer/farming zone for the nguni tribes coming south in Africa. This was 201 years ago, European settlers ( French, German, Dutch and English ) barely survived with the agricultural tools they brought. Although we still considered european, we have defiantly changed our farming methods.

" They were granted farms near the village of Bathurst, Eastern Cape and supplied equipment and food against their deposits, but their lack of agricultural experience led many of them to abandon agriculture and withdraw to Bathurst and other settlements like Grahamstown, East London and Port Elizabeth, where they typically reverted to their trades.

A group of the 1820 Settlers continued on to Natal, then a part of Zululand, home of the Zulu people. At the time, King Shaka ruled the territory with highly trained warriors. Leaders of the Natal settlers requested permission from Shaka to stay on the land." Source

, just been searching for images. I know this lady, her husband and her daughter. They are considered proper boere ( afrikaner/dutch decent farmers ). It was very sad her husband had trained up 10 oxen, restored an original wagon and was going to follow the route of the Dutch settlers over 200 years ago. He was basically going to travel 250 km with oxen, wagon and family as his ancestors had done 200 years ago, to farm and prospect for new lives. I am not to sure it happened due to COVID and political tensions. If your having wpm issues, grab a vpd chart, I’ve found if I stay within range I don’t have any issues.

Best of luck on your grow and please don’t give out any product that has copper sulfate used for any portion of the grow.

Id hate to see a product that helps so many ailments become a cause for some.

But basically it less dangerous than pure solphur so …
I’m going to test it .
Otherwise , what is the secret sauce against mildew for U guys ?

A real product that works , not dangerous not omeopatic …
Thanks

Keeping the temp and humidity in check is your best option!

If the plants are creating it defoliate!

Agree,
I’m talking about very initial stage and just on
The wedding cake from seed junky …
I think can be because of the temp difference between day and night … I go really down in night … like 11/12 celsius and then raise up until 23/24 …
External temps now are about to zero , so when the light is off temps drops and create condensation
I think that’s the main reason , but for this cycle I can’t fix it … new growing spaces and new issues
I also don’t like to spray pure chemicals on the plants … but I can’t let them go with mildew … we talk about 25 wedding cake clones … it’s a pity

So U are from South Africa Chris?

Wpm issues can be handled with a mix of hydrogen peroxide 3% and distilled or ro water. Spray entire plant down with hydrogen water and then rinse off with fresh water. At harvest give the buds a wash with same mix 1 cup of peroxide to 5 gallons of water. Have 3 buckets for wash one to wash 2 to rinse. After wash and rinse set the buds hanging im front of a fan til they r fairly dry not dripping then go for ur dry and cure. Good luck. There is also a milk mix u can use on wpm issues. If u do peroxide try not to get a bunch on the soil as the peroxide will kill off any good microbes needed.

U can soak the whole plant down without harm. Dont use anything with powerful force just spray to soak and let sit for a few then rinse. It will not affect the buds at all ive done it on 3 plants with no harm done. Just make sure all leaves dont have water spots before u put back into the light so u do t get burn spots. Never tried the milk one but i have done the h202 mix on this plant is one i did 3 days ago started to get some wpm on her. Room she is in seems to stay 80 alot of the time. Fan died on me and that caused no flow of air and created wpm. It is a blue cheese auto flower 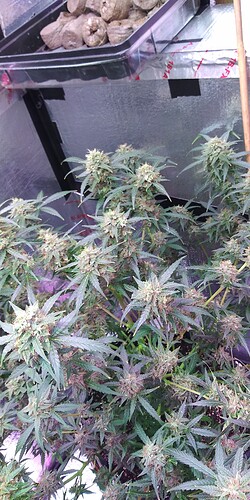 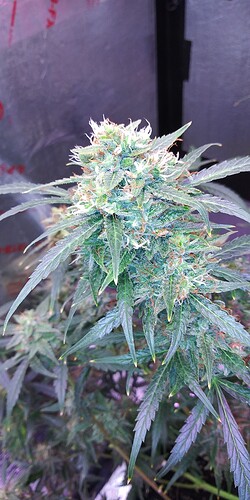 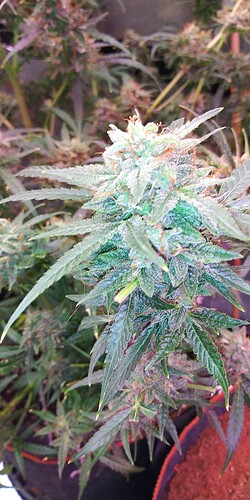 Look up jorge cervantes on youtube and search him budwashing for wpm. He is a great man to watch vodeos on. Super informative and right to the point. Another to watch if u do autos is bill ward alot i see his videos is on auto but jorge is a super guy to watch and learn