Do all growrooms contain molds?

Every growroom has mold simply because where there is moisture there is mold.
Mold spores costs money! In its essence, mold is death, for example, if a big tree falls over in the forest, what makes it decay is molds and fungi, such is its power to destroy.
In an indoor cannabis growing environment we really do not want molds or fungi blowing around spores in the billions affecting our beloved plant’s immune system!
A fundamental flaw with growers is that they believe that if they do not see mold then they don’t have any. This is simply not the case, for example, a simple low cost petri dish (for yeasts & molds), left in the grow room for one hour usually results in remarks such as; “what!! Is that what we are breathing in”!?
Once we have this realisation that these spores are costing us in efficacy and also in yield, the question is how much does the unseen mold spore actually cost us?
Well one company from Sydney Australia did a test in a commercial facility in Los Angeles and it had a company called iLab (an accredited cannabis lab) with PhD’s come to the location and take air samples in the premises and measure the before and after.
This test was done with 2 identical rooms side by side but with separate air systems.
The difference was a 33.9% in yield. (Seems to unbelievable to be true)
And a 80% reduction in CFU (colony forming units, molds), per gram.
The room grown with Canna Air Care was 97.5% lower than the Colorado safe levels of molds at 10,000 CFU per gram. This room had no spraying whatsoever.
What most growers do not realize about molds is that they come out for breakfast at dew point, which is usually somewhere between 1am and 5am everyday when most of us are sleeping.
Spores are released in the billions and spread around by circulating airflow eventually finding itself being taken into the air conditioning system. A simple swab test inside the ducting and the main air handling units can show a plethora of harbored molds. When you actually take a step back and consider that the large air handling unit that sends out large volumes of airflow, is actually omitting billions of spores into the growroom, things get scary!
Kill Fear! With a one pound pack of Canna Air Care, placed inside the A/C system begins to clear the fear, lasting about one month depending on how much of the pack you have open.
Again, a simple petri dish with agar for yeast and molds, can reveal the amazing difference as well as the healthiness of our most prized assets.

the below petri dish was exposed to 400L of commercial cannabis production air, (via a $6500 air sampling device). this was a defective plate, (finger touched the agar) so we left it for the growers to have a look at after 72hrs at room temperature.
The usual exclamation when growers see this is; “wow, is this what i’m breathing in”?

This is a very low cost test that can show you what is hiding beneath your sight, lurking away trying to destroy everything that it comes in contact with… if you breathe in mold, you will feel old! plants too! cough, cough 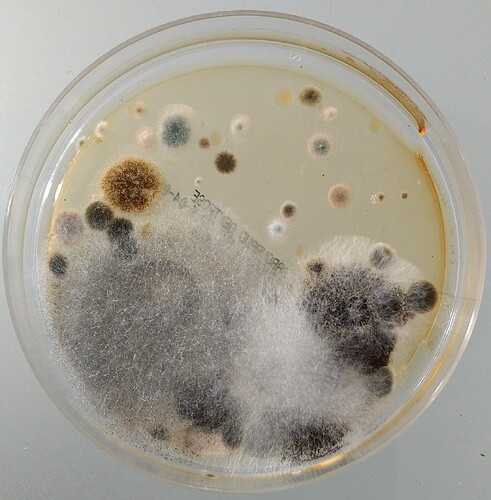 Very informative and partially true, but it is worth mentioning that mold in fact does not develop if the conditions aren’t right for it to do so.

Even though mold spores are always present, they don’t do any harm if they remain spores. You can think of it like a human body- it contains a plethora of bacteria, which may, under certain conditions, be harmful. But these bacteria normally do no harm, as they are contained by the conditions provided by the body. Outbreaks occur when one or more of the body’s functions begin to fail.

The most crucial factor for mold appearance is humidity. If you keep relative humidity levels at around 75% you will most likely never encounter mold and in-turn, won’t lose any money over it.