I like the fact that the Autos look decent, how was the density of the nuggs compared to full grown versions?? and what about the potency and yield of this round?Trying to get an idea if there is a savings in time vs a loss of quality or yields. Can you get 6 harvests a year with these genetics? did you change any feeding formulas, and anything else that you did that was different, and gave higher yielding and improved quality!… 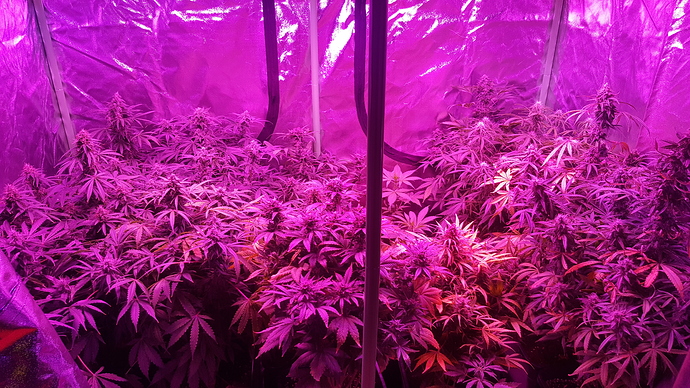 The density of the buds was good, firm and solid - the potency was high and the presentation is great - i haven’t got testing capability yet - but our street tests have come back with great results, although being all organic we have a richer flavour anyways when compared against more commercial producers. The auto’s are a bit lighter on the feeding regime, although I do give them a wide range of composts and teas through the season.

Our outdoor season is from May - September - I run rotational systems so we are moving plants throughout harvest all through the season - with about a 3 week starting/growing run and then 5-8 week finishing time - they are great to get multiple yields through the season and have product in mid-summer when everyone else is still watching their plants grow. The yields can be a bit variable depending on the strains - but the best ones yield 3-5oz dry per plant if they have enough space. If you think of it over a full season you can yield over a pound off about 4 square feet. But you can have multiple strains and a more continuous yield.

HI Nathan,
I am interested in trying this out, where would you recommend I purchase my genetics for these from? I tend to like a bit of it all …excellent genetics of Sativas, Indicas and Hybrids…Costs?

Greenhouse Seeds have some of the best Auto lines I have tested (Jack Herer, White Widow, Northern Lights, Sweet Mango are all strong producers and beautiful plants with strong stability and a great smoke). Dinafem, Humboldt Seeds and Dutch Passion also have very good lines although I have had a bit more variation in their stock. I have tried a number of others but those are the ones that really stand out.

Fantastic! I am on it I will send in updates as to how these go …

Stay tuned - I will be posting some more Auto pics from a harvest that is nearly ready. Maybe we should start a separate thread on Autos…

I agree on the thread for Autos, could start a new type of sea of green movement, what happens to the plant if they are packed really tightly and dont get any underpruning, basically one big lollipop of bud?.. or do they need to spread out like “regular” plants, going to be super interesting to try out…is anyone dong clones of these yet for commercial use?

I can pull this discussion part out into a separate topic if that would make things easier @nathan and @charlie.

I think we should have a separate discussion. This would be a good starter for it.

Hi Nicholas, Well are there other people into this idea, its a whole new catagory of usage for me so I am down for learning as much as possible, the idea of doing multiple harvests per year is great, especially from a freshness standpoint!, nothing better the just cured goodness… what about clones? does the plant respond the same as any other cutting? I would think so .

It doesn’t clone well. It has a rapid lifespan that pushes towards flowering. The ruderalis is an amazing plant from a biological point of view. The speed it grows is amazing. To get the most out of it - you have to give it optimal conditions from day 1. I will be starting a new round of plants in the coming weeks and will post updates along the way.

The growth cycle of the auto is about 3 weeks of veg, and then they show sex and go. Flower will generally be from 6-10 weeks.

They are best cracked and then put straight into the final pot - the less root disturbance the better they grow - they do well in 3 gallons, but for best production 5 gallons or more will give them plenty of space to grow and stretch out.

They don’t need as much fertilizer as a full season - I grow them in a rich coconut coil, soil and compost with mycorrhizae blend and then amend them with fish emulsion and other teas for veg and then some veganics for flowering and bud compaction.

But having multiple harvests is awesome - you can try multiple strains in the season and build up quite a collection - plus they are low profile plants - some will grow up to 6 feet - but most keep around 2-4 feet. So perfect for an urban environment.

Autoflowers are going to be a future staple in commercial growing in my opinion. I’ve had requests from a few commercial operations now for bulk seeds (thousands) and have heard multiple stories of autoflowers saving people butts when they have a bad frost on their main crop or run into disease/pest, providing a very quick turnaround for a good harvest still.

Autoflowers are becoming larger, more potent, and more consistent. I can shred a lot of the myths and bullshit that have followed them for the past decade, feel free to ask questions!

Autoflowers are going to be a future staple in commercial growing in my opinion. I’ve had requests from a few commercial operations now for bulk seeds (thousands) and have heard multiple stories of autoflowers saving people butts when they have a bad frost on their main crop or run into disease/pest, providing a very quick turnaround for a good harvest still.

Autoflowers are becoming larger, more potent, and more consistent. I can shred a lot of the myths and bullshit that have followed them for the past decade, feel free to ask questions!

Hi Jordan, Charlie here, I\ let Travis know I been battling some illness, lol…anyway…I want to try a run of these…your opinion. who is the best source …how do I get in touch with them …and what strains have you tried that really works well and produces some great icky bud…simple.

Hi Jordan, Charlie here, I\ let Travis know I been battling some illness, lol…anyway…I want to try a run of these…your opinion. who is the best source …how do I get in touch with them …and what strains have you tried that really works well and produces some great icky bud…simple.

Hey @Charlie, I work with several commercial and smaller, independent autoflower breeders and some of my favorites are Mephisto, Dinafem, and Dutch Passion (European breeders.) Mephisto is considered to be the “hot new kid” on the block, with some of the most potent testing we’ve seen with autoflowers (from grower/user submitted lab testing results) and consistent documented grow results around.

This is a “Man Bear Alien Pig” autoflower, grown by “Ash-a-ton” in DWC. 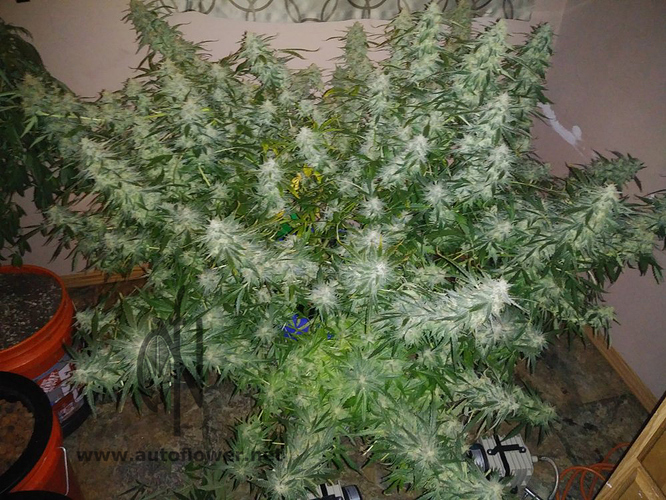 I’ve grown out their Ripley OG autoflower and it was INCREDIBLY strong. Would put to shame a lot of stuff I’ve seen in the dispensaries here just on a personal user experience.

I’ve worked with @DutchPassionTony who is a member on here for years now, and Dutch Passion has very solid and stable autoflowering genetics.

Here is one of their :Auto Ultimate’s" grown by “Mr Ganjamoto.” 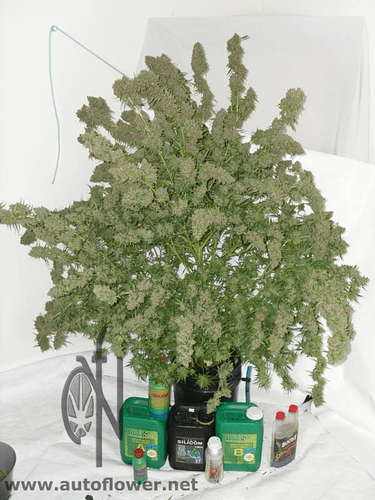 And Dinafem is top notch, I have grown out both their photoperiods and autoflowers and have been satisfied every time. Their White Widow is phenomenal, their Kush n’ Cheese, ohhhhhhhhh dude. If you like stinky, stanky, cheesy cheese? Get their Kush n’ Cheese.

Dinafem offers an extensive library of CBD oriented autoflowering strains. I’ve grown out their Haze CBD and Industrial Plant CBD (the Industrial Plant was by far the better of the two in my opinion, in terms of effect,) but definitely have seen a heavier lean from them on the CBD side of things (in fact, they released that Remo Chemo strain (photoperiod) not long ago, a collab with @RemoNutrients , right Joel?)

We’re actually about to start testing out some new strains for Dinafem on the AFN forum as well, a new autoflower strain called “DinaMed Auto CBD,” and two new photoperiods, “The Purps#1” and “Purple Moby Dick!”

As where to get seeds, two seed banks in the USA right now that I’ve heard good things about are SeedsHereNow.com and Oregon Elite Seeds (OES website is down but I’ve met these guys several times in person (they have had booths at several expos now.) If you don’t mind international shipping, Seedsman is a highly endorsed seed bank followed by Attitude Seeds.

@Charlie how many autos are you looking to run on this batch?

My man!!! this was exceptional, and I am takin it to the bank this season!!! love the pics 'n Picks and the result looks awesome. I had some white widow from a friend that was auto and it was so crytally and sticky I couldn’t even handle it in joint!

Love it, you guys rock it.

Ok I’ve moved it all to this new thread. Let me know if the title works if it should be changed to something more descriptive.