HELP! Barnacles or something else...?

Hello all, I hope someone can identify these wax like bumps for me.
My partner says nobody knows what they are called and what they do but he has me remove them and they seem to be coming back every 1-3 weeks after removal.

What is your opinion on these bumps that run up all the way to the half of my stem. Producing a sweet smelling wax once removed.

I hope i uploaded the photos correctly 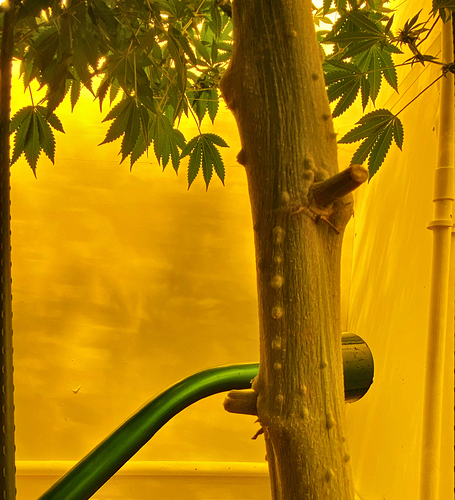 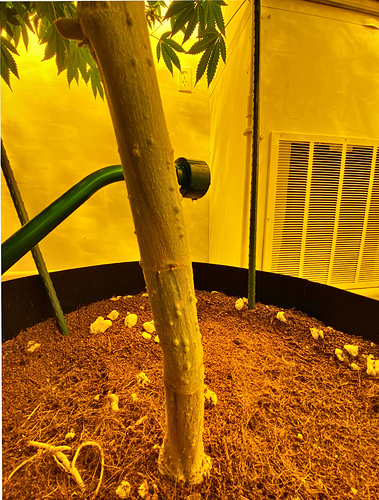 Thats a bug bite bud. You got barnacle/scale bugs. There like aphids. The sweet wax is the excrement.

lol. Those type of bugs attach to the stem and just stay there stealing energy from the plant. Once there embbeded they suck the juice out of the plant. These circular pests swell up and excrete a sweet, sticky, shiny substance called “honeydew.” it attractsnother pests and also creats food for molds and mikdew. Once they move where they like they lock down and attach to the stalk and are very hard to remove once there on.

Right …? I can’t find a single article about it online or anything.
The guys call them “barnacles”. I asked what they are and they didn’t know, told me not at any conference they’ve been to has anyone been able to even guess.

We have these throughout the whole cycle and at every crop.

You’re a beast for identifying that.

Our plants grow pretty tall, wk 3 flower right now are At about 8ft tall ( our mistake of letting them get that tall)

What can we do about this or are their any preventative measures ? @preybird1

There treated just like aphids! Spray when there young. They are usually super tiny when there babies. Look like little brown aphids when there small. There horribly, related to the mealy bug. Also they come from outdoors mainly on infected plants media clothes ect.
One preventive that has worked to at least partially repel scale mealybugs, spider mites, and other sucking pests is to root feed and foliar spray Rhino Skin, a potassium silicate formula, at 200 ppm and with a pH of 5.7 for both root feeding and foliar spraying.

They’re often called “armored scales” because many varieties of these pernicious pests armor themselves with a gooey but hard plate that covers the real insect underneath.

Because of their armor, they’re virtually impossible to eliminate with pesticide sprays, horticultural soaps, and other spray methods.

For example, if you want to suffocate them with horticultural soap, or penetrate them with a natural pesticide, you have to spray so much on them that you also suffocate your cannabis plants.

Some growers try to brush them with isopropyl alcohol. This does dissolve their bodies, but it also harms marijuana plants. Your gonna probably have to get on the hands and knees and manually remove and crush them by hand messy and time consuming.

Sweet glad to help. Get the bastards. There sucking your buds. Once you see some without bumps grow you will understand. I have seen mites reduce flowering crops from 25%-40% reduced flower size and substantially slowed vigor and finish time. It takes an infested plant 3 weeks to get back to normal healthy growing after it been srayed several times. And infestation wiped out. Or your cloning the tops and washing the cuts in a magnetic stirrer then root hormone and a long quarantine if your saving it.

On it !! What I’ve been doing is removing the bumps by hand but obviously it’s deeper than that since they just reform even bigger in 2 weeks.

So basically , I’m screwed regardless

Thank you x10000! On my way to the hydro store right now and Will do as you have given advice on.

Do you clone this strain? Or is it from seed? I wish i could see a piece of the sliced off barnicle to verify this is not just a weird genetic thing the strain does non stop. I dont know the strain either. Id love to play with a cut. But either way has me very interested whats going on here. A slice and a digital microscope could be the ticket. Do you have a digital microscope for checking trichromes? Did it come with a stand?

nice im gonna be watching for sure.
Got go harvest seeds is lots of work.

I can get you whatever info you ask of.

I will cut a piece off and view it under a microscope as well to see what I can find. Either way your stats are blowing my mind … slowing down and effecting the yield to that percentage …? That’s insane man and this has been EVERY single crop.

I was thinking along the lines of it being a genetic thing as well as a cloning from this specific gene. If you need more information let me know

Definitely lots of work for our ladies isn’t it

This is the place for your answers. Prey is very knowledgeable and will get you on your way to very healthy crops!

Week 3 flower from this photo but we have other warehouses that are wk 6 flower and have this problem.
You are recommending lady bugs for this? I was always an advocate for natural predatory insects so that’s awesome.

With that being said , is there a specific lady big species ? @Ladithief

Hahaha my man we just harvest some grapes all summer for this reason !

What stage of growth are you in?

No I only use things like lady bugs, peppermint oil on a small scale holder and add the oil to it and you should be good. Last is the shower if I can’t solve it that way. .