How do you package your cannabis seeds?

If you handle seeds, how do you do your packaging?

Here’s an example of some packaging of various breeders (I took these tonight,) and you can see the range goes from simple to lavish to armored (love the tins!) 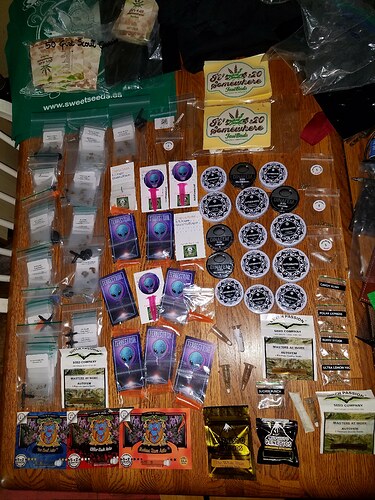 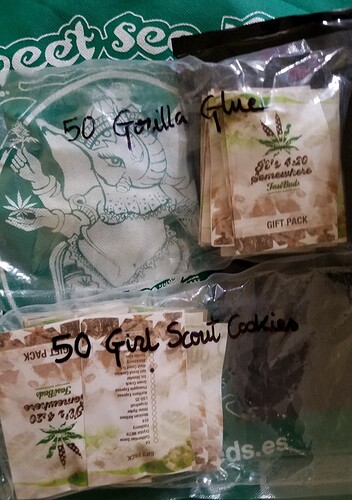 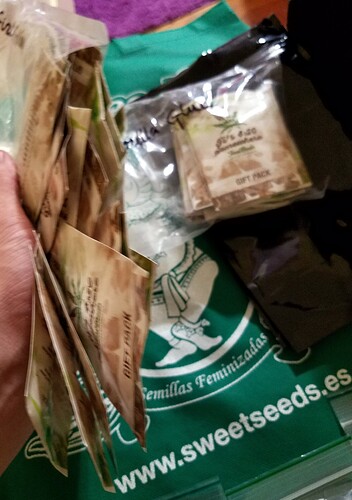 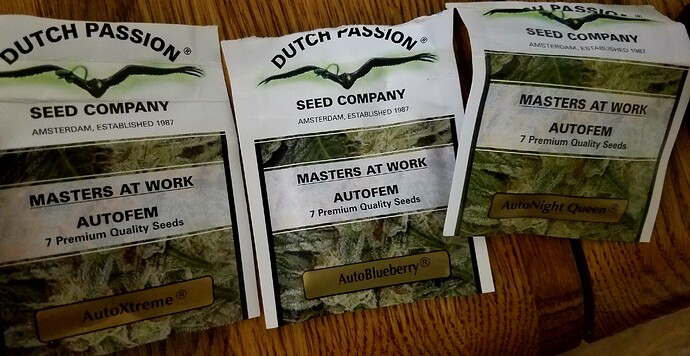 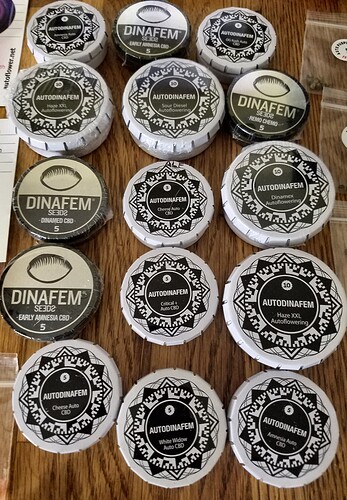 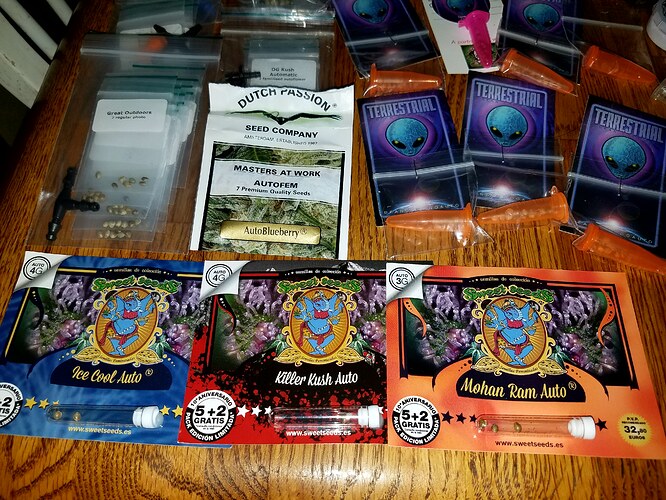 @mastergrowers what are your experiences with obtaining seeds? Has locally sourcing worked well? Online the way to go? Any bad experiences?

The only local who I’m sourcing seeds through right now is @Subcool.
Packaging is simple and clean… I’ll take pics next time I bust open the safe and pull out the seed vault!

I’ve got some of his old Jillybean’s (apparently they are pretty valuable to some circles, I’ve had a silly amount of people approach me about them.) I just let my neighbor take half the pack, I’ll never grow half this stuff.

Nice! I used to grow Jilly in every room I flipped! Grew like a champ with shortish internodal spacing, great nose, fruity citrus notes…ahhh even the thought brings me back!

Do I need to fish out those seeds, Nick?

I’d run Jilly again, in a heartbeat! Hell, I’d get cuts back to Subcool to help him repopulate his grow!

Is there a method for germinating bulk seeds? Like, a 6 pack of Bounty paper towels (that’s a little grower humor! I’m full of dad jokes, I can keep these coming forever!)

We’ve only gotten seeds from Amsterdam. It is kind of hit or miss. I did not fully appreciate the genetic diversity in seeds. Even strain that have been around for years.

Question: How many seeds do you have to start in order to get top notch genetics that you clone?

I germinate right in the coco in which the plants will ultimately grow. It’s less labor and far less shock to the delicate little seedlings than a transfer would be from, say, wet paper towels.

Say, Kirk, what germination rate did you find with those Dutch seeds? Speaking of hit or miss, I found a lot of misses on my germination when I sourced seeds from Holland.

Had terrible luck with Seedsman. Even though they are English, the seeds come from Holland. I Love Growing (Robert Bergman) has been the best (90 to 100%). The germination rate was OK for Seedsman, but most would not break the surface. We were doing the paper towel method. Other companies (MSNL and others) average about 80%.

I’ve never grown any of Seedsman personal stock before, but they are also a seed bank (carrying a variety of other breeders genetics) and I have to be honest, they are my number one recommended seed bank I refer people to for purchasing most commercial seeds lol! I’ve recommended them for years to many of our growers simply for ease of access to other breeders genetics (which are supplied and resold through Seedsman.) Plenty of other seed banks out there as well, Attitude, Herbies, etc. Same gigs.

I have to be honest since I started using root riot/rapid rooters, I’ve had nearly 100% germ on anything that gets put in. If you haven’t used them before or thought them gimmicky, give 'em a shot. Dummy proof seed germination, wet the cubes, squeeze them with your thumbs to get out the excess, put the seed in the hole and stick it inside a tupperware container. Put that somewhere warm and dark, germs in 24-48 hours in most cases. I’ve germinated literally hundreds of autos doing this and can count on one hand how many didn’t germinate.

Germination rates
I can say that my average germination rates are usually close to 80-100%. Doesn’t seem to matter what kind of seed/plant I’m growing.
Though even with expensive cannabis seed I still cull the crappiest one usually if it is significantly behind. The runt could be the best. But likely will be a pain to grow.

If it’s not close to 100% then can quickly become zero… mainly also because I’ve learned my lesson from trying new things on all of the new seeds in a batch. Oops.
So I go back to my notes trialed and true method.

In my opinion the single biggest thing is a heat mat. And only recently did I get a temp controller for it. The variation in temperature I believe also will increase germination.
Especially if it bounces slightly higher than you may think is safe.
I’ve come to see the min/max reading over 30c at top of 3" pot. Those seeds were up in two days.
At typical 72-74f it takes about 3 days and they are up majority. By day 5 all are up.

I think one or two seasons I used peat plugs (jiffys) or something similar. Then always straight into the first pot. Which is now a 3" plastic.
With pro-mix HP myco (useless amount of myco IMO, so now also adding more mycorhizae at planting, repotting etc)

In horticulture industry no one uses these expensive alternatives. They also dont straight germinate pot to soil(typically) because it would waste a lot of product for the non germinated ones. (In annuals some do) but typically mass germinated in a tray of perlite or loose soil then replanted, or mass germinated in cell trays packs like tomato seed and repotted very quickly into larger cells and then Again straight into production pots.

Two hours or so usually somewhere warm (70-74*f) can and have done up to 12 (max IMO in stale water) or 24 hours(I brewed a compost tea last summer and half the batch of seed went in, which is very well aerated and great results)

2.prepare everything and pre water soil for potting. Just like potting nothing should never be too wet. Seeds should maintain a level of 3-4 during germination. (Out of 1dry-5wet scale)
As soon as root radicle emerged (can’t see usually) and hypocotyl rises you can allow drying to level 2 and watering back to level 4.

(Currently on second run weighing from day one. It’s very interesting to see how pots dry from first to third day. It’s a bell curve. So before wilt is a long time compared to the quick water loss day one and two.)
For example. 3" pot with peat weighs about
40-45grams average when dry. (Level 1)
Water to 125/135 to have lots leaching. (Level 5)
First until emergence I maintain roughly 80-90grams. (Couple drops top dressed every 20-24 hours usually is enough, not too wet!)
After emergence allow drying back to level 2 at roughly 50-60 grams. Then water to full or near full saturation.110-125grams (Level 4)

Today I watered a two day seedling with aerated compost tea. Made with my thermal compost, earthworm castings, tiny bit molasses, tbs alfalfa pellets. Had brewed water for 24hour (remove chlorine) then charged the water with aquarium water for 24hrs. Added the ingredients at that point. Brewed for 24-36hrs before using.
Watered my flowering girls with it. No foliar.
And water and foliar my seedling at 3-5 days old. Will see but I imagine they’ll love it. On the last batch I top dressed early with earth worm castings/compost. Great results. Two times fertilizing and entire run. Such a strange way to do things. And no ph checks, ppm etc.

Seed company experiences
Currently on second run of crop king.
100% germ on three packs. Culled last one up if couple days behind. Seeds looked terrible and were very inconsistent size and shapes.
(Fems).
Had crop king blueberry pack (regular) only got two and both went male.
(Was trying something new that time)

Listening to pod casts online lately suggests that’s not a very good a “respected” breeder amongst the groups.

These are the only kind of seed available at my local hydro store.

I’ve driven couple hours and that’s the only way. And then the selection is absolutely terrible.
I went to a seed bank, no one wants regular in Canada? So I bought the only pack of regular they had. This has happened a few times up here.
I prefer to see the package so I can at least look at the seeds. Usually they don’t even want to let me. Haha.
I’ve grown some Dutch genetics (am from there after all). Dutch passion mainly. Good germs from what I remember. (Pre note taking)

I really did not like greenhouse seeds. Horrible rates or quality of germination. The coating was a joke and IMO hiding tiny or ugly/inconsistent seeds. Only got a mix from them once.

Canada and stocking good genetics locally is terrible. I’m looking now at options for mailing so I can start collecting some proper genetics. I need medicine for pain from work injury to my back so now I have to be more specific than in the past.
Cheese (not sure exactly which one) randomly was amazing for that.

In terms of packaging darkhorse genetics had a nice set up that looked really fancy. But you also then can’t see the seeds.
Seeds exposed to light long term risk being worse off for germination rates. So can’t win there anyways I suppose.

I wonder what the industry will do when the prices of seeds become realistic for the recreational market. That will greatly affect branding price point and quality of these products.
In Canada only liscensed Producers will be allowed to sell product/ seed.
Not sure how that will work with the American/worldwide breeders.

Have any extra to spare/sell @Jordan? I wouldn’t want to take your prized @Subcool ones…
well of course I would. Who wouldn’t.

From what I’ve being hearing on the weed nerd podcast. :).
Nice collection indeed.

Thanks for all the detailed info on how you germinate and your experiences with various seed companies!

I would be curious to keep this thread going and hear about other users delivery/packaging/germination experiences with seed companies around the globe!

lol only seeds Ihave are in zip lock bags in the bottom of my sock drawer .

Thanks for adding that! I’ve definitely ruined some really great seeds just because I improperly stored them! Great article!