Hey all. I’m advising on a large indoor/greenhouse commercial grow using an in-house blended peat moss as growing medium. The usual additives such as perlite, lime and mycorrhizae are present but they’re not happy with the root mass being produced. Upon inspection of the roots I noticed somewhat brown, ill-formed mass, though the plants looked strong and the flowers were healthy and finishing nicely.
Nothing smelled or tasted funky (yes I often taste soil) and no bugs visible to the eye were present. It’s not a major problem, things overall are quite healthy, just looking to improve. I’ll go back to do some further digging but thought I’d throw it out to the community brain to see if someone has a light bulb go off before I do.

Define “liquid salts”. What product/ingredients is it? At what PPMs? If it is literally a salty fertilizer (high salt index), it can damage roots if misapplied.

I doubt it’s the media, personally. It sounds like they might be drying off too much between watering?

I find that if I keep my potted plants constantly damp, and fully saturate the soil, the root mass is full and bright white. If there is too much drying between watering events, even just once, they start go brown. Also if the water isn’t fully saturating the soil, the roots will only be where the water is located, particularly if that water contains a lot of fertilizer (no need for roots to go look for it).

I use the last one to my benefit. It’s how I keep a plant in 1 pint of soil for 2 months (first clone round for outdoor). They are huge and not too root bound given their age. 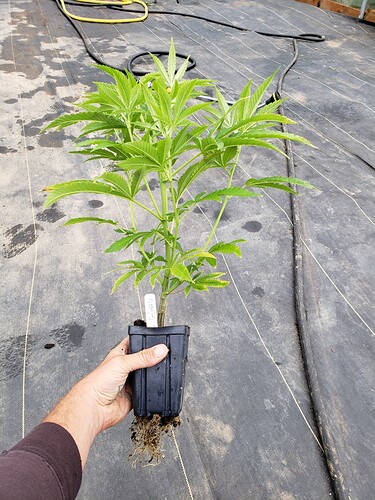 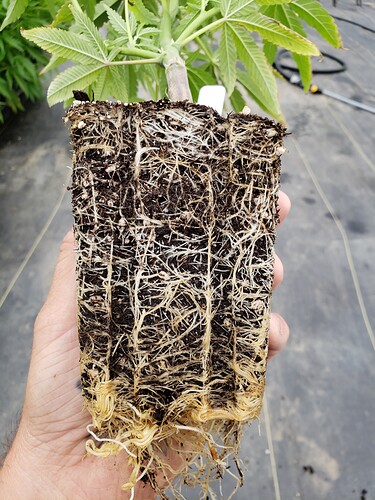 The root zone seemed well saturated at the time, though I would agree they looked as if they’d suffered a dry spell at least once since being in their final pot size. I’ll look into that as well but thorough saturation didn’t appear to be an issue.

As far as the definition of salts, its a pretty standard list of ionically bonded compounds found in most liquid fertilizers. More specifically, its a product called Plant-Prod MJ out of Canada. Its formulated for Cannabis specifically and has a low salt index according to the manufacturer. I have never personally used the line but they have a whole fertigation program that is being implemented by a pretty sophisticated Argus system. Its something I intend to dissect pretty thoroughly over the next days/weeks but it seems to be working the way it’s designed, and the company has a clear maintenance, calibration and cleaning SOP in place.

Im in the process of finding out the state of the water coming in (e.g. chlorinated city water) and the filtration and/or aeration that is implemented pre-mix. Lots of variables to isolate but that’s part of the fun!

I’d track your auto watering as the first step. Everything else seems good.

Brown roots could indicate Pythium. Depending on where you operate, there are likely approved fungicides to be used as a soil drench. There is also a peat-based media you can use with built-in biofungicide.

Yes, There are for sure approved fungicides that can be added if need be, and adding a bio-fungicide to the peat mix itself is on the table if necessary. It would amount to an enormous cost so unless its actually necessary I won’t be doing it prophylactically.

Growing outdoors in moist and humid Hawaii, I never thought that water would be an issue, but I experienced the same issue.
My solution, after many trials, was to up my use of coarse perlite to 25% by volume of the grow mix. It solved the issue but requires daily watering and a commensurate increase in fertilizer.
I’m fooling around with aero pots now but due to their high cost, I can’t see it as a workable solution for the long term.

How big are the pots?

I grow auto flowers in one gallon pots and feminized seed in five gallon pots. Regular (non feminized) seed is grown in seven or ten gallon pots but at that size be sure that your drainage is perfect to prevent root rot (pythium).

Jonny,
Water your plants as usual. Wait a few minutes, pull the whole plant out of the pot. Slice the root ball about 1/3 of the way in vertically and pry it open and see if the center is dry or wet. Or, have you already tried that?
Dennis

This definitely could be a pythium (root rot) issue. I recommend conducting a necropsy on one one of your root balls. If you notice a brown slime or sludge, or smell any rot, its would be a safe bet to suspect root rot.

From where are you sourcing your peat?

Don’t have better advice than anyone else about what may be going on currently, however, I can tell you that I have a container that allows for amazing root development in plants. If you think it may something that could help you out then let me know I will get you some additional info. I know a number of our growers love it because they can see what is going on with the roots throughout the growing process and address issues as they arise rather than reacting after multiple plants are impacted. Check it out

Jonnny,
Did you slice a dirt ball open to see if the inside was wet or dry, as I suggested??? If so, what did you see???
Dennis