Has anyone ever tried this method? Im wanting to try it out and was wondering if anyone had experience with it. And if there was any tips or advise? I was thinking a nutrient solution and maybe some air bubbles from a fish tank air pump. But not circulating the nutrients and swapping it once a week.

Adding an airstone will do a world of good and swopping out the nutrients weekly to. Hope to see you posting updates. I like simple systems, less piping, drippers, pumps and equipment. Means less can go wrong.

Uhm not to be the complete idiot here but…isn’t all DWC basically “non-circulating”? At least thats how it worked when we did it, just a rez and four buckets that would get fed when the water levels were low but nothing recirculated. Now FWIW I did a recirculating system later and that one really seems to blast the growth on the plants, anything I stuck in it just went crazy. Same four buckets, same rez only added 3/4 inch garden hose and connectors to the bottoms and a pond pump and feed-lines to the main rez… 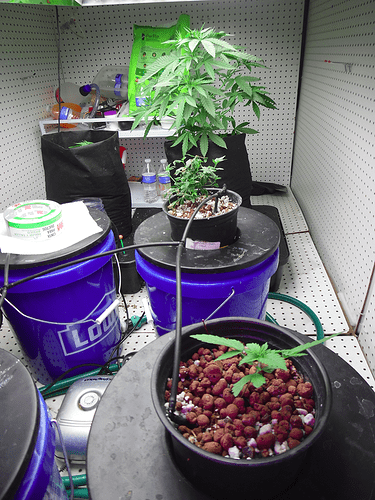 Not neccisarily. I prefer a DWC undercurrent system. But trying not to use a lot of electricity.

If you want to do non circulating, try to make it so you can fill, drain and check your nutrients without having to move the plant each time. Connecting 2 buckets with a hose near the bottom will let you do all of your maintenance from the bucket without the plant in it.

Ah good idea. I was just going to use an external level tube. And just suck it up out that way. Saves me room i think.

Definitely! If the bucket is up off the ground (a 5 gallon bucket fits perfectly on to an upside down 7 gallon plastic pot) you can just gravity drain it by bending the top of the hose down.

I agree with one and all on the ffth bucket approach; even if you don’t do anything else fancy, having four buckets DWC and the fifth as a rez is a pretty low-tech yet efficient way of maintaining your DWC rigs:

In my case this worked well for a crop or so but me being me, took it the next step by taking this same setup, adding a cheap pond pump to the rez, used a foot of spare garden hose to pump the water up and out the top. Since this was already a garden hose with standard fittings I was able to just screw on a 3/4 inch adapter to a 4-way 1/4 inch splitter; each one of these lines went an individual bucket where with an elbow joint and a few inches of tub I ened up forcing a constant stream of nutrients right down the tap or center roots; the levels would self-balance with the main rez by returning thru the hoses, I slapped a simply filter on the connector and then recirc the water back up and out the top.

Good side to this was that it grew pot like nobodies business, nothing could touch it.

Bad side (for me) is I could not automate it and because I knew my brain was rotting, I was on a mission to automate as much as humanly possible so I could successfully grow when others would be forced to quit. Specifically back then I was designing a “component-based” grow system where each plant kind of carried its own personal root-environment that could be physically plugged into (say) the veg system and it would automatically share the lights, air and nurtients of the veg tent, no further work on my part called for. If I moved that plant/pot rig to the bloom side and plugged it in, it got the bloom lights, feed, etc. By switching to a gravity fed setup, increased the size of the rez to 33 gallons I was able to complete the last phase of my uber-automation goals…see this is why I hate dementia, I had a valid reason for boring you with all this, it wasn’t to hear myself talk…I know I explained the automation to explain why as fantastic as this 5-bucket growing system was, it didn’t scale up and I had bigger plans than four buckets; for a time I was maintaining a rotating crop of some 20+ plants, maybe half for production meds and the rest for experiments; I love to experiment I think because i love learning and every experiment teaches me something new, even the failures. Thomas Edison was known for saying that after trying 99 different elements as the filament for the light-bulb, he was happy because he now knew for fact 99 things that didn’t work and exactly why that was. IDK how my story was to end but I can say this setup grew cannabis faster and more vibrantly that any other method and that if I had no desired to automate stuff (some folks are really into the hands-on daily thing; I no longer can afford that) I would be using this now exclusively. Of course, I had this idea years before the trellis rig thing so maybe if I did do it today I would find a way to integrate those to designs since they are at the end of the day designed to work with completely different sections of the plants…

OK sorry I I remember I will update this post…as Officer Barbrady would say, OK Move along, nothing to see here…