Planet of the Grapes Grow Journal

This is day one of the grow journal, hopefully all the new stuff I am trying will all work. I purchased some small 45mm net pots that fit the holes in my Turbo Klone cloner. (first time using) And this will also be the first grow that I am going to try RDWC. Last grow is drying and curing nicely, and quite tasty.

Last grow was these two girls… 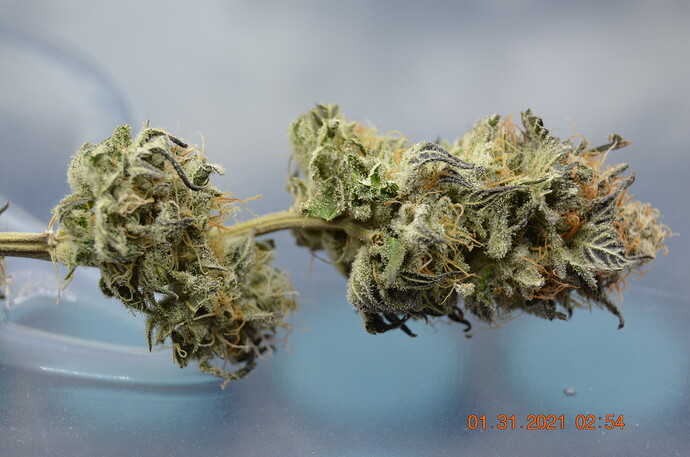 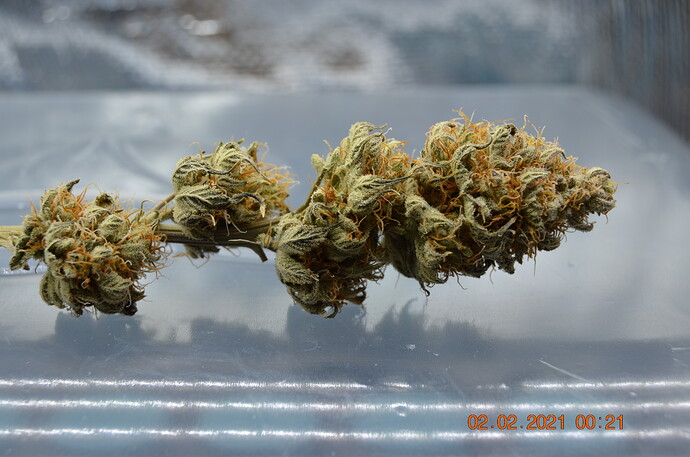 Here is the small net pots…I put a small open cell foam cloning collar in the bottom of the net pot, then a jute fiber based grow/cloning cube made by Midas in the top of the net pot. I split the cube in half, put the seed in about 1/2" down and then folded it back shut…then pushed it into the net pot and formed it from square to round. Then I threw all six prepared net pots into the cloning water, with Clonex cloning solution @ 5cc per quart. I’m going to let them soak for 24 hours then put them in the top and turn on the cloning machine on a cycle of 15 min on and 15 min off. I plan on using the humidity dome until they pop up. And away we go. 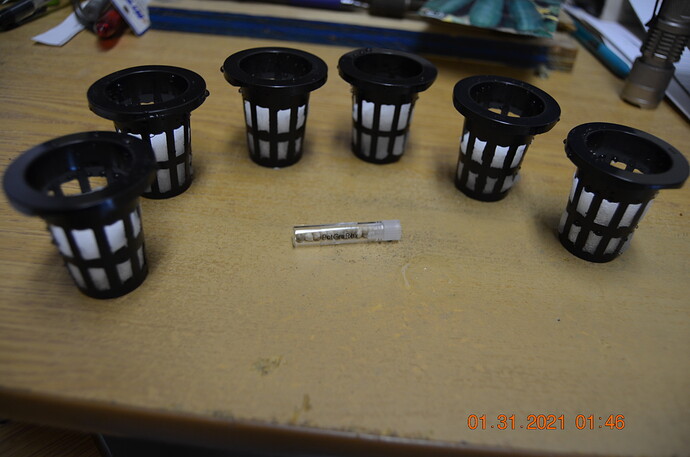 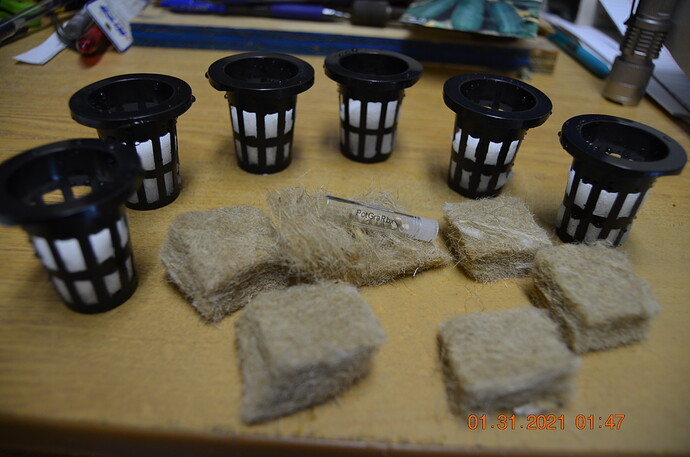 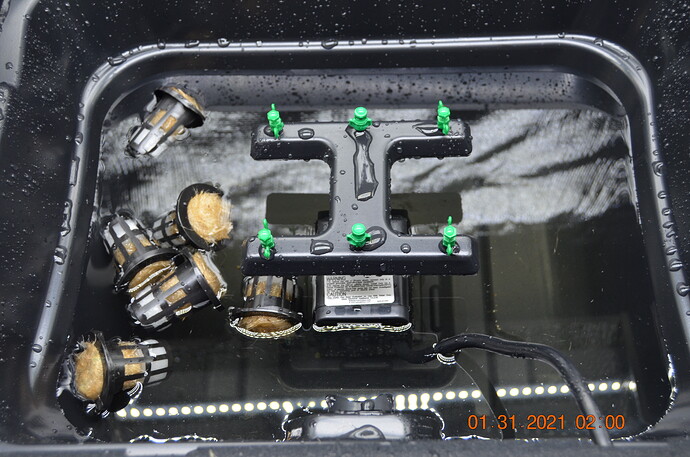 Well 5 days and only one up, these seeds were pale as a ghost I’m not surprised they are not all up after 5 days, I am surprised that ANY of them sprouted. Got new seed on the way from Chitown. 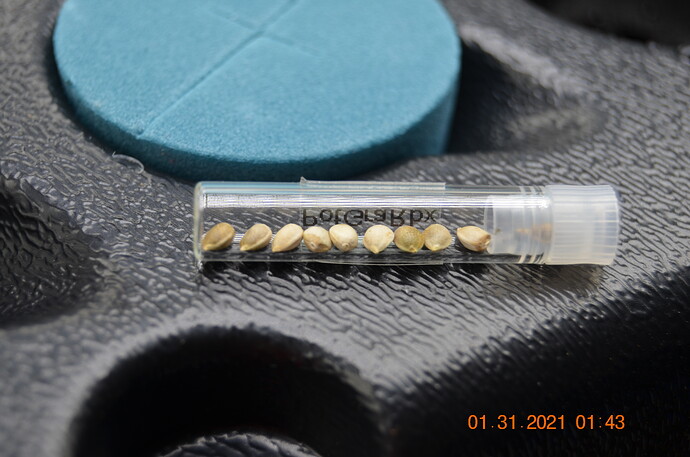 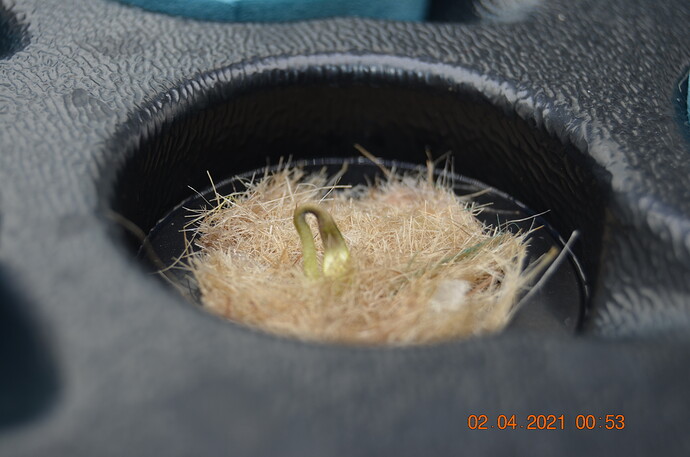 Some updates and info…02/11/2021 Today put in my RDWC system in the tent and hooked up the air lines and water hoses. 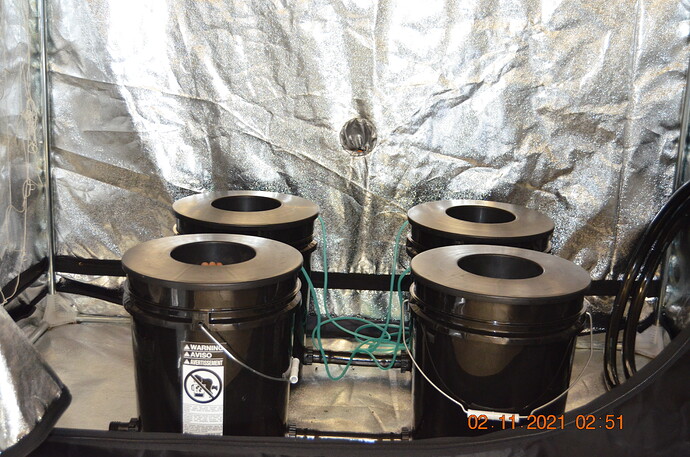 Some pictures and a warning about the Midas seed starting blocks… 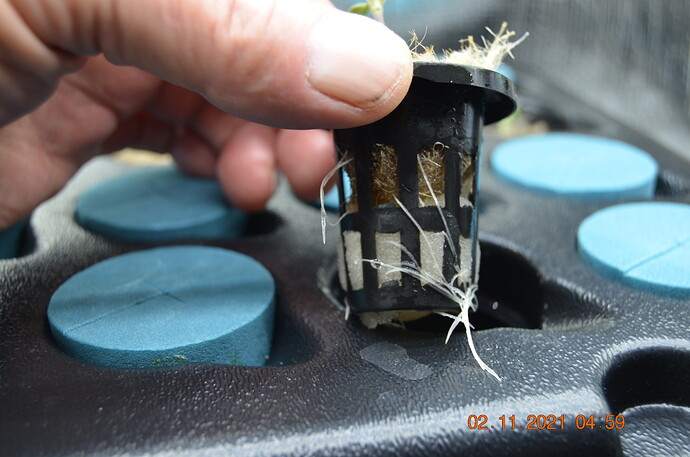 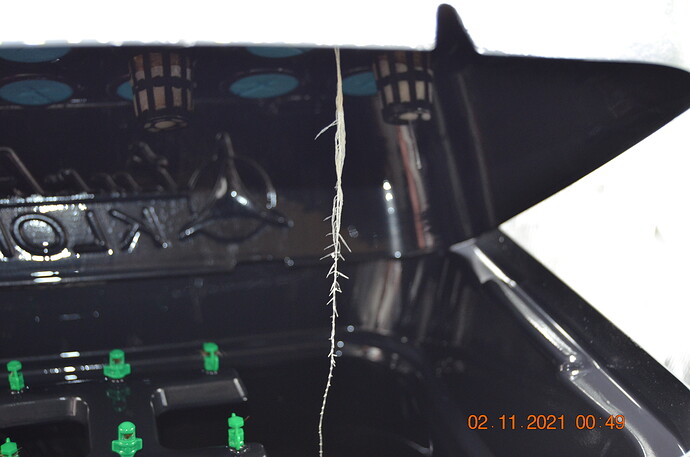 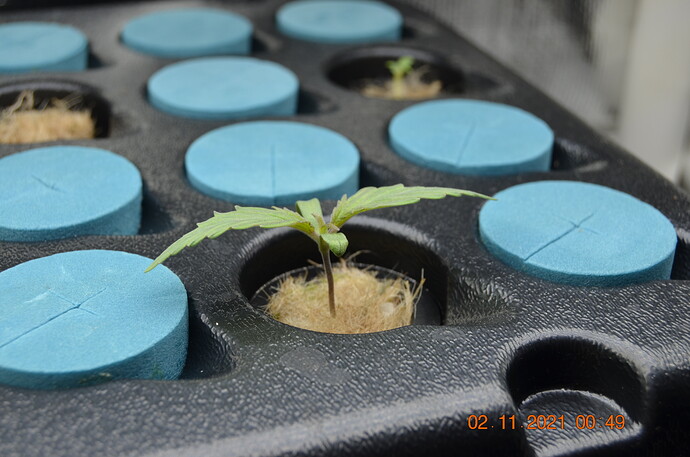 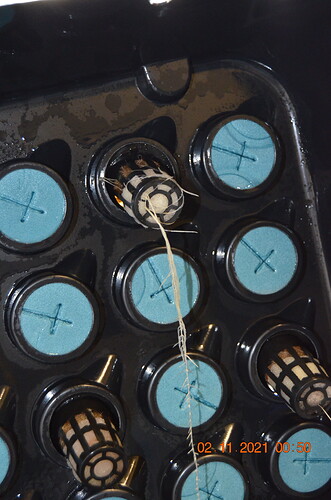 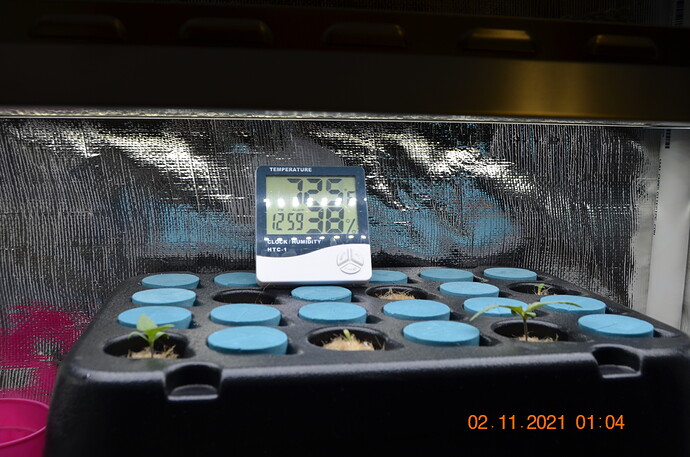 I added a air stone to my Turbo Cloner, as you can see the one largest seedling which is only 1" high above ground has a 18" long tap root already and I didn’t want it to drown in the still water as I am running 15 on/15 off cycle on the cloner pump.

Now about the Midas jute fiber cloning seedling blocks…they will work fine as is by just splitting the block in half as I did (they are a layered mat) and will work fine for roots only coming out of a clone cutting. However DO NOT split these in half and put a seed in them like I did, I had only one out of 6 seeds that were able to push it’s way up through the (too stiff) jute fiber. They WILL work but you will need to put the cloning cube in the basket, form it, then poke a hole in the center and put the seed in the hole so it has a place to come up through. Luckily I was able to split them open and adjust the seed up to the very top so they could then get light and start growing. One of them just broke off. They were wound around inside the cube like a ingrown hair. Had I not pulled the jute cube out of the basket and re-arraigned the seedling they would not have made it.

Finished up the RDWC today, and also installed the two 360 watt 5500k lights. I decided to put them under the same color of light as my seedling light which is great for veg, and cloning as well. So they will be going from 50watts to 700watts same color and spectrum.

The new girls are doing well in the cloner and by the time the new 1150 GPH air pump gets here they will be ready to go into their new home. I have to say I am nervous as a cat on a hot tin roof. First time ever for water culture grow. Been doing a lot of reading on EC and PPM. Calibrated my EC meter today. Filled up all the buckets and tested the pump out, also hooked up one air line to one stone in one of the buckets and tested it, tons of air even from my 320 GPH pump running two stones. So the 1150 should keep the girls happy in their new home. 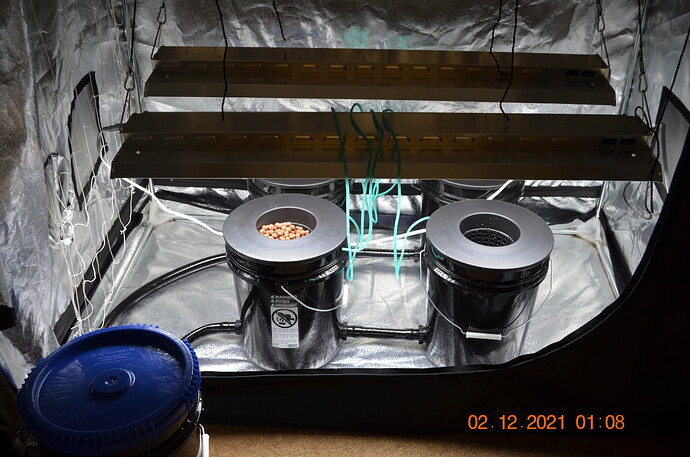 Air pump arrived…hooked it all up, turned it on. Got plenty of air for all 5 buckets 1150 GPH. Hung it up above the buckets on a ratchet rope like used for lights, hooked it to the handle. Might have to redo that as the handle doesn’t look all that sturdy. Cut all lines to the same length all 5 feet, except the one going to the reservoir outside the tent that one is 7 feet. Still works just fine and is only for keeping any nutes from pooling in that bucket and only there just to stir up the water. 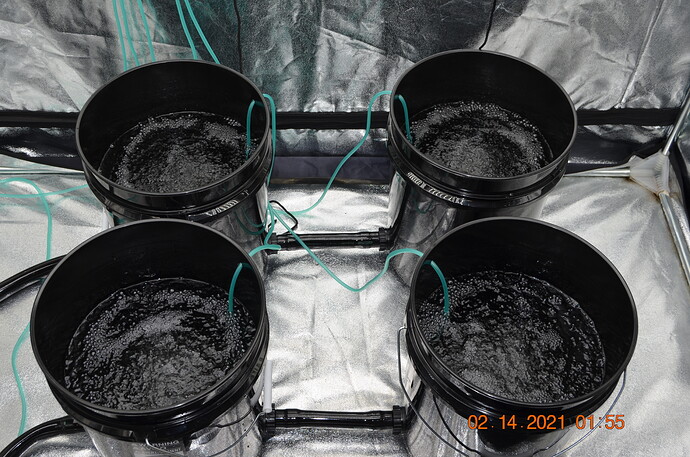 Today was the day for two of the girls to draw a new bath…charged up the buckets and reservoir with nutes, root tonic (Microbial) and three additives Cal/Mag, Silica, and carbs. Set them in their new home capped the other two buckets with black sealed lids until two more girls are ready and away we go!!!
PH was set at 5.8 and PPM was at 369. The girls were almost 2 weeks old so figured they could handle mid range PPM for seedlings. 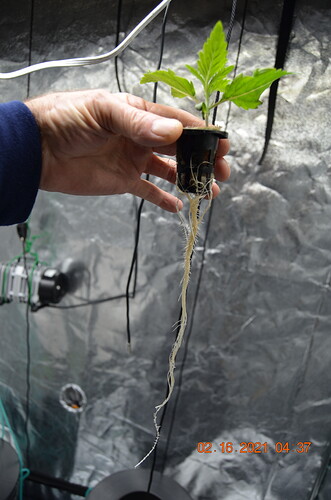 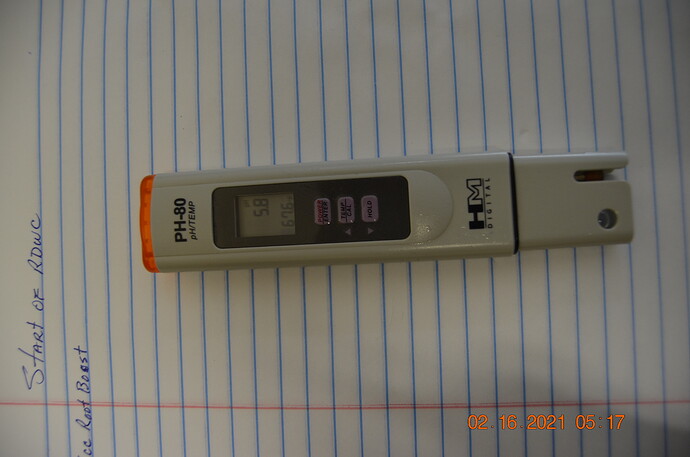 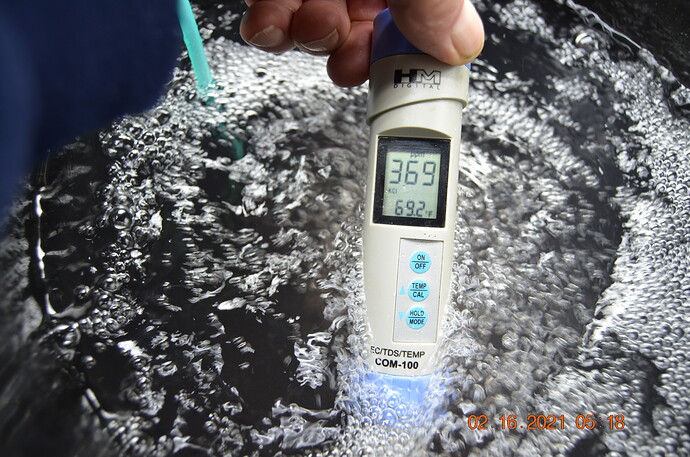 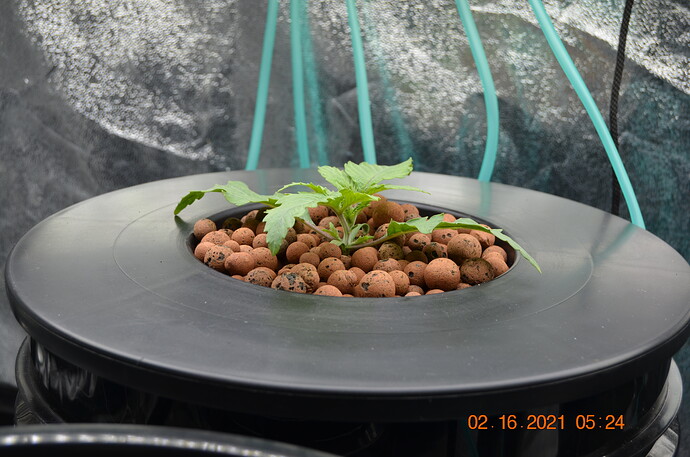 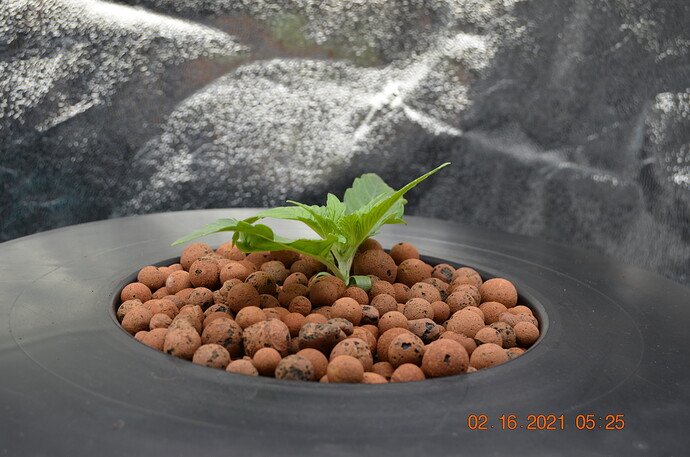 It’s been about an hour since I put them in and I swear they already look happier lol.

Oh and I decided to actually use a product line I already had. True Plant Sciences complete line. and as a mention after I added all the nutes the water was at 5.6 PH. I just wanted it a little more mid range and adjusted it with 1/8 teaspoon for all 20 gal of water with baking soda. Baking soda is extremely strong PH up material so if you decide to use it in your system it takes very little to change the PH.

Second day in the bucket…leaf size really getting big…just looking a little droopy. Maybe got too cold in the tent last night. Still have two empty buckets thanks to the USPS taking three weeks to get seed from Chitown in Chicago to me in St. Louis. A 6 hour drive. Still don’t have them but supposedly coming today. Also added some reflective tops on the buckets to help with the water heating up. 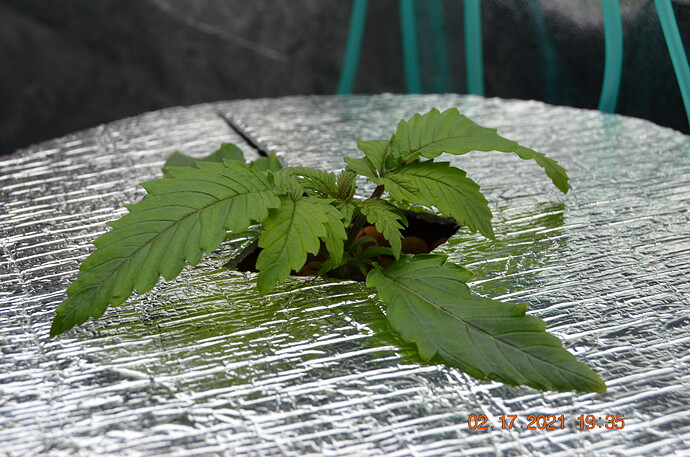 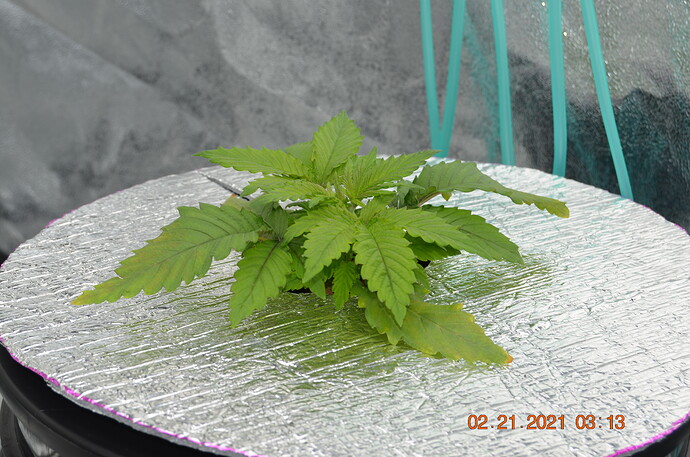 Looks like she needs more juice, I topped off the reservoir but didn’t add any nutes, looks like she is getting a little pale and spotty. No spots yesterday. The problem is, I had bad seed and had to start some more for this grow, and some of them are 2 weeks behind this one, and they are all in the same RDWC system so hard to make the nutes fit all four of them, little one too much big one not enough…

This morning the leaves on the biggest one were laying flat on the insulation foil.

Here is a shot of all four… 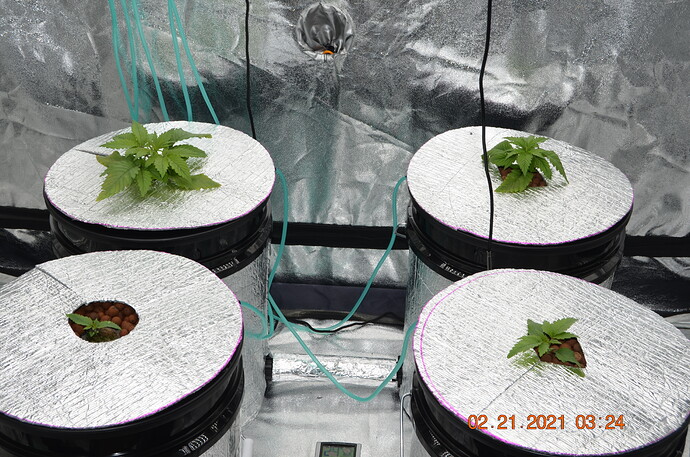 Well tomorrow is one week in the Hydro bucket for this one which was the first in…Gotta up the nutes a bit looks like, a little pale. Gonna go 100ppm stronger this coming week. And a little more Nitrogen. Changing out the water. 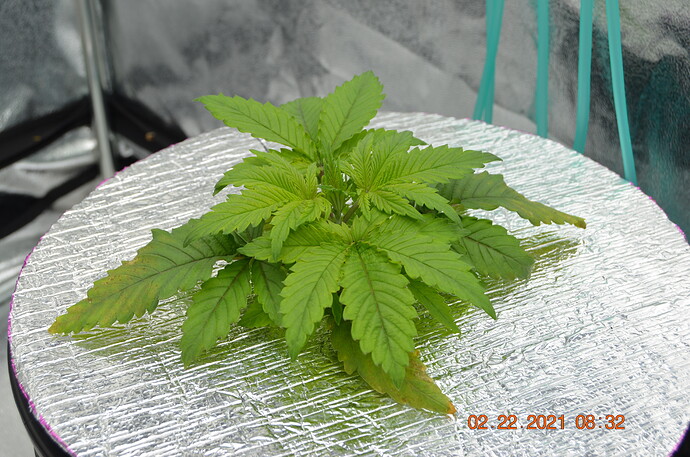 Got busy this morning and changed all the water on the RDWC system. The PH had gone up to 6.1 which was fine. They seemed to be doing a little better but still pale. I used my 20gal shop vac to suck all the water out of the buckets and emptied it into the basement drain. I Ph’ed the new water to 5.5 after I added all the nutes.

While I had them drained I cleaned out every bucket with peroxide with a microfiber towel. Not sure what caused it but they had major slime in all the buckets, and pieces of semi hard yellowish white globs of something. So I did a complete clean. I am using the TPS nutrient system, and the only thing outside of that, that I added was some AN VooDoo juice and a half dose of AN Carboload for sugar for the bacteria. Something between the two product lines didn’t like each other or was spoiled. There was noticeable foam as well. While I was cleaning each bucket and because of the gunk, I put each net pot lid with the plant into a bucket of aerated PH’ed water with UC Roots at 5ml per gallon to clean the roots off during the bucket cleaning, so they were in that solution for about 10 minutes each.

Now that I have the entire system back up and running and filled with 20 gal of nutes and PH’ed. There is no foam at all. So it was either a incompatibility or the AN VooDoo and sugar did the slime and foam. The EC is .89 and the PPM is 400 after deducting the start of 20ppm on the rain water and 20ppm of the PH correcting citric acid.

The roots seem to be doing good despite the gunk and foam, almost all white with just a little pale brown tinging in a few spots, this is why I bubbled them in the UC Roots for 10 minutes to clean them off.

Pictures of the roots… 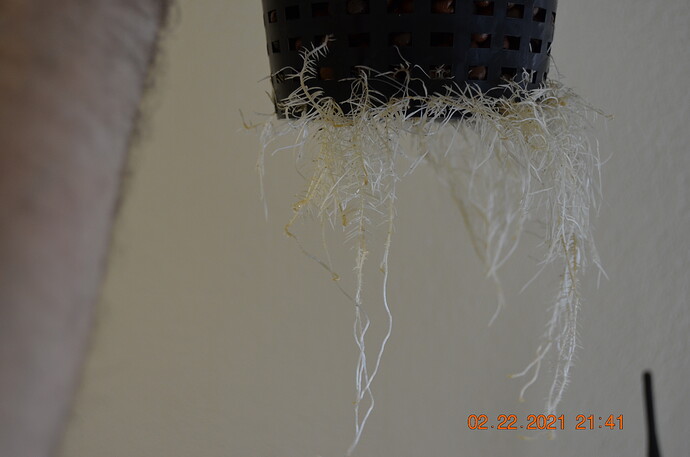 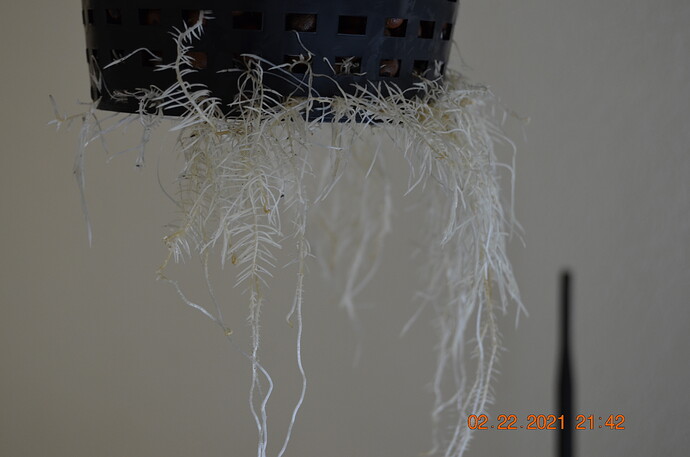 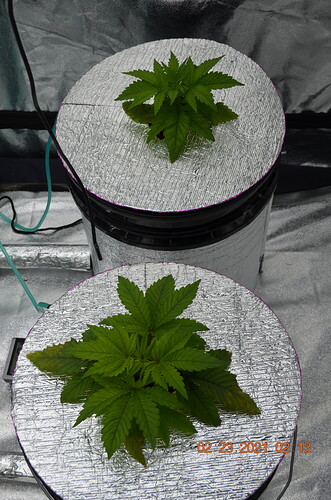 Another day gone by…they grow fast in hydro for sure… 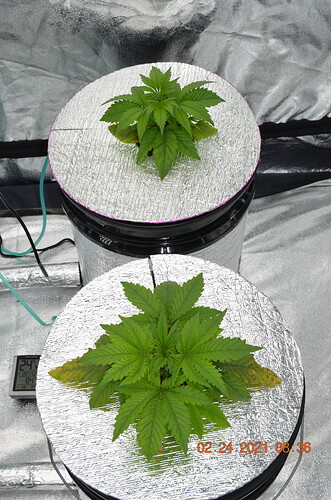 Two weeks today since putting them in the Hydro buckets…lots of problems with getting the PH to hold, been doing a lot of baby sitting and adjusting the PH multiple times a day. Here is one of them on day 14. 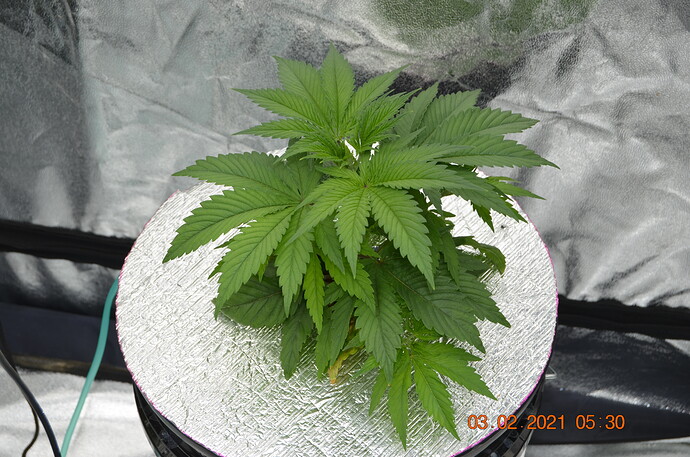 Signed up and looking forward to seeing the magic.

Oh AND I have planet of the grapes to throw in my next grow as well. That was the other thing that caught my attention… good luck - we’ll b watching!

Any chance you have a link to those cubes? They sound a lot more environmentally friendly than rockwool.

Thats the only reason i dont use rw. It looks like insulation. I dont trust it. Lol…

And it essentially never breaks down. I don’t know how I feel about growing in everlasting insulation… Lol

Here ya go…I’m not real hopeful for the start of this grow the seeds were pale as a ghost. I think they packaged up WAY immature seeds. Nothing happening yet.

MidasHydro Rooting Cubes are the perfect medium to grow your cuttings and clones into a beautiful collection of plants and vegetation. Watch as your cloning success rates climb higher than ever before! Our unique formula of Jute fibers and water bio...

These are made from jute fiber and water retention gel.

You are very welcome sir.

Update on the cloning machine, jute Midas cloning cubes, and a warning.

I decided to keep the entire grow journal in the first original post and just keep adding on to it. That way the entire grow will be in one single post at the top without having to go through a long thread.

On board following from the other side of the Mighty Mississippi.

First time ever for water culture grow. Been doing a lot of reading on EC and PPM.

Awesome update and enjoy the ride. Its a brave step in the right direction water culture, but the reason I stick with soil. Much more forgiveness.