Standing on the Shoulders of Giants – DJ Short and Subcool

The international cannabis market is forecast to reach $47 billion by 2025, bolstered by the UN’ historic vote to recognize cannabis’ medicinal value – prompting the adoption of medical frameworks globally. As the world wakes up to plant’s therapeutic potential, it is paramount industry pioneers are remembered and receive the recognition they deserve. Many of these trailblazers transformed undomesticated landraces into the top shelf cannabis strains we enjoy today. While many of their genetics are familiar to millions, the breeders are known by relatively few. In homage to those that risked prosecution to advance the cannabis gene pool, we have profiled two giants of the cannabis industry – DJ Short and Subcool.

DJ Short gained notoriety for his Blueberry strain, which to this day is widely considered the original and best blueberry available. The vast majority of today’s blue and berry varieties can trace their lineage to the fabled cultivar, cementing DJ Short’s status as a legendary breeder. The Detroit native has been cultivating cannabis since the seventies, inheriting his passion and expertise from his great-grandmother – a gypsy herbalist who grew the plant for medical purposes.

In the seventies the majority of flower was poor quality, but when DJ Short came across something special he saved it for his private collection. Over time he found suppliers of better and better product, procured from cannabis communities from around the world. As most of this cannabis contained seeds, the aspiring breeder was able to compile a library of his favourite genetics.

His favourite strains were Mexican and Thai sativas with extended flowering periods, sometimes taking a full 16 weeks to finish. Infamously difficult to maintain, Short regularly grew dozens of tall gangly plants at once from his Oregon home. When squat indicas from the Hindu Kush began to circulate up the West Coast, it provided DJ Short exciting cannabis breeding opportunities. Although he disliked the stupefying stone, he recognized the potential to combine favourable indica traits with the best of his sativas.

Short selected an indica for its taste and aroma, before crossing it with his in-house genetics to reduce their flowering times and increase their yield. In doing so, Short had created some of the first hybrid strains and would grow them to maturity, before smoking their flower to separate the best from the rest. Without commercial breeding technologies, Short had to rely on his palate and traditional methods, like scratching stems to reveal terpenes. Trial and error taught him what to look for and what scents paired well. By 1981 he reached a substantial breakthrough, a line of easy to maintain heavy producers that hummed of berries and honey.

One of these cultivars was the soon-to-be famous Blueberry, producing dense flowers with purple and blue hues. Clones were circulated up and down the West Coast and the strain soon gained celebrity status, with seeds distributed to Europe and finding fame in Amsterdam’s coffee shops. The cultivar went on to win numerous awards, including two Cannabis Cups, prompting many to try and emulate its fruity flavor and heady high. Despite these attempts, after four decades DJ Short’s Blueberry remains the berry best. 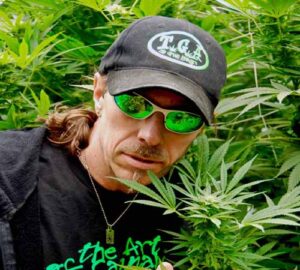 Subcool is the celebrated breeder behind TGA and The Dank seed banks, which achieved universal acclaim for Space Queen, Jack’s Cleaner and Vortex. Known simply as Subcool, Dave Bowman passed away in 2020 on his return to the top of the cannabis food chain. Subcool began cultivating in the seventies, before a series of busts landed him in prison, igniting a lifelong dedication to free the plant from the shackles of prohibition.

Upon his release, Subcool moved to Oregon for its sympathetic cannabis laws. There he created Team Green Avenger, with a collective of medical growers who combined their expertise and feedback from thousands of patients. As one of the first seedbanks to appreciate the importance of lesser-known cannabinoids, the team spent a decade refining its flagship THC-V strain Jack’s Cleaner, later released in seed as Jack the Ripper. Jack the Ripper remains one of the fastest finishing photoperiod Lemon Hazes to date, named by High Times as a top ten strain of 2006.

In 2013 Subcool was diagnosed with a rare form of emphysema, prompting a move to the warmer climes of California. Despite ill health he continued his breeding projects, creating Agent Orange, Vortex and Querkle. He settled in Sonoma County buoyed by the opportunity to grow 30 plants, but the higher temperatures proved to be a double-edged sword. In 2017 wildfires ravaged the county, taking over 60 lives and 8,500 homes. Subcool was lucky to escape with his life, but he had lost everything – his home, his mother plants and over four million seeds.

Without the tools of the trade, or even a permanent location, Subcool began the arduous task of sourcing back lost parent plants. While some close friends had cuttings of mothers, Subcool had to buy back some of own seeds. Slowly, with mothers and fathers similar to the originals, Subcool managed to reproduce many of his classic strains. Once he had his core stable back, he began searching for new phenotypes to create new varieties. One of these new varieties was Strawberry Daiquiri, developed by crossing Space Queen with Kyle Kushman’s Strawberry Cough. The collaboration was nicknamed ‘the Dank Brothers’ and provided Subcool access to Kushman’s critically acclaimed Stardawg, which he crossed with Space Queen to create Strelka.

In 2019 Subcool was on the move again, this time to Arizona. He drained his pool and converted it into a sunken grow op regulated under Arizona’s medical framework. With donations from the cannabis community, he acquired many of the items needed for cultivation and donated the cannabis grown to local patients. Although he left this life in 2020, Subcool lives on through his Weed Nerd YouTube channel and genetics, which inspires others to carry on his legacy.