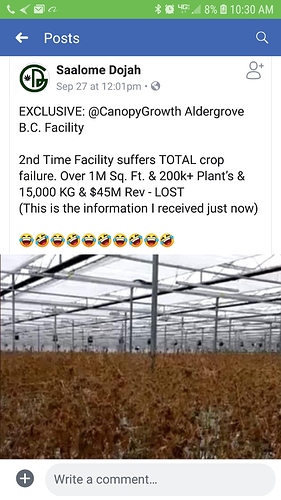 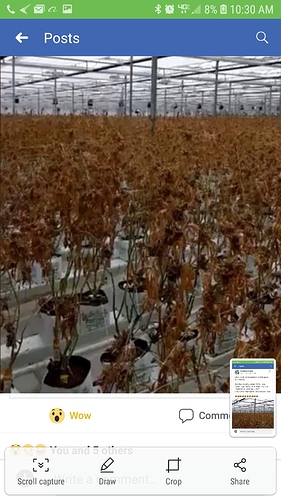 Do we know the cause yet?

Canopy Growth may have suffered total crop failure in its B.C. Tweed facility just a couple of days ago due to a lack of regulatory approval.

Has to be more to this story. This kind of plant death does not happen overnight. I don’t care how bad your grower is, something is not right with this.

Someone is very disapointed with the individuals responsible for this loss. How could anyone allow this to happen?

"Moving the crop to a different location which has a processing license wouldn’t be profitable, which is why they decided to immediately stop the grow and let the whole crop dry out at that point, instead of pursuing the flowers it could have produced.

The company confirmed they now have the required license to process future crops in the same facility."

That has got to be the biggest lie I have ever heard. How is it not profitable to grow out the crop and ship it somewhere else? Tomatoes get moved 3 times by truck before they’re harvested and sold so dont tell me trucking costs are to much.

And how do they magically have their license days after the crop failure?

I also find it interesting how they say “IF its true”. Well, is it, or isn’t it? You got shareholders to answer to buddy.

“Not a loss on the books”. How is it not? How about the costs to grow that crop in the first place? How does the loss affect the projections? Last i checked, projections are a HUGE part of the books, as least for a GOOD business person it is…

I’ve been saying this for a long time in private but I’m finally going to say it here in public…these companies (Aurora, Canopy, Aphria and all the other publicly traded companies) are corrupt. Just look at the Officers and their histories. None of the come from Cannabis. They all saw $ and moved in because they have the ability and wanted the bank.

These companies are valued at over 400x their revenue! And that’s only the ones that ARE turning a revenue.

They dont grow weed. They grow company values. Which is a false value the way they’re operating.

Where are these companies going to be in ten years? They’re already valued a such a high number that one of 2 things are going to happen. Either they will become one of the few who reach a $1T evaluation, or they’re going to pop their bubble and go bankrupt.

Well, let’s look at Amazon and Apple, the only 2 companies in the US who have hit the $1T mark. How did they do it? By being the ONLY competition. (Trust me when I say that, and no, Microsoft and Ebay do not compare, look at how far they got left behind the times).

There is simply to much competition globally for these companies to gain enough traction to hit that mark, so I dont believe they will.

So let’s add in another metric.

The Canadian Cannabis market in TOTAL is worth under $10B. Canopy just recieved an investment of $5B for 40% of their company.
Giving them a value of $12B. So their company is worth more than their national market can provide.

“But that money was for drinks on a global market Bryan, who knows how much that’s worth?”

No, it wasnt. It was a partnership investment, not a product investment. If it was a product investment, they would have seeked only 10% equity. Yes, products will come of the partnership, but that’s not the play. I’ll bet any of you that Canopy will do another round of funding publicly in 5 years to buy that back. A 5 year investment flip for Constalation is a pretty awesome investment in anybody’s books. Who is left to pay? Shareholders. Who is left to profit? Officers. THEY DONT CARE ABOUT WHAT THEYRE DOING OR WHO IT AFFECTS! How are you in turn, supposed to trust that they’re growing safe, quality product. I know I won’t be buying their flowers when our market opens here in 18 days. (First off, WOOHOO!)

I honestly could point out at least a dozen more issues that I have seen with these companies. Long story short is that these companies falsify the books to increase the company value as quickly as possible.
They’re building up an exit, a big one. A dramatic one. These guys are all building up their retirement funds and nothing else.

If you have stocks in these companies, I would sell, and sell quick.

On point. I agree.

We’re all thinking it…thank you for saying it!

I have to wonder if you’re right about sabotage…this is a huge company that is publicly traded. I have never seen such a massive and complete crop failure. It looks like someone replaced all the H2O in the reservoirs with straight bleach and fed that to the entire crop. I have rarely witnessed such complete and total devastation.

Nick, they alluded to it in the article, without saying it overtly. But if you can read between the lines, it’s a pretty obvious expense on their balance sheet.