As Peter Hackett said in Leafly’ s report, who is a vape hardware expert with the company AiR Vapor, “A well-known Chinese carts brand are failing a test at 0.6 or 0.7 ppm lead, over the limits of 0.5 ppm, which is illegal in California” (California Cannabis Labs Are Finding Toxic Metal in Vape Carts | Leafly). This issue will definitely widely affects the industry.

Under the new California rules, lead limits were lowered to 0.5 parts per million in a cannabis product on Jan. 1, 2019. That’ s more than twice as strict as Washington’ s limit of 1.2 ppm.

The carts that were passing often do at 0.3 or 0.4 ppm lead while Transpring stands out at 0.09 ppm according to the latest testing results.

Cheaper cartridges might have more lead, because adding lead to brass and copper makes the metal more moldable, thus cutting down cost on a cart.

This is something that will impact the carts market and this is what oil brands concerned about.

Transpring got the hardware approved regarding heavy metal testing in early February. The result data of our A10 cartridges come out very low at 0.09, far lower than the 0.5 limitations. 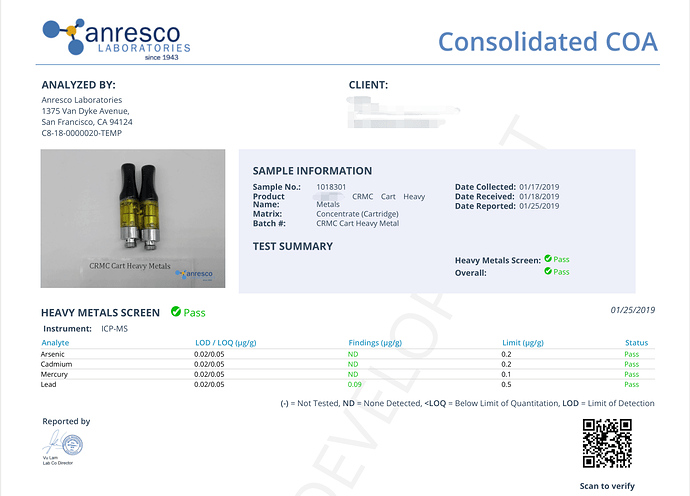 Transpring has been devoting ourselves to the innovation and manufacturing of vape cartridges and preheating batteries and continuously improving vaporizer technology. We’ ve been working very hard on our cartridges in past years so that we can continually advance our hardware and technology to meet the demands of diverse extracts on the market today. As the market changes rapidly, so does Transpring.

The Transpring new technology ceramic has smaller diameter tiny holes under a microscope, this average holes allow the fluid to spread better, heat faster, and ensures better tastes from terpenes.