If you tune into a conversation between growers for long enough, the topic will eventually turn to trichomes. Generally they will be referring to the plant’s sticky resin glands, which contain cannabinoids and terpenes, with their quantity intrinsically linked to cannabis’ therapeutic quality.

However, not all trichomes are glandular and some are simply single-celled organisms that defend against insects and pathogens. Cannabis develops trichomes for environmental protection, including pest control, moisture regulation, climate fluctuations and UV radiation.
The majority of glandular trichomes, with the ability to store cannabinoids and terpenes, form in vegetation and mature in flowering, at which point they turn from clear to cloudy and finally amber.

As their creation is dependent on several factors, maximizing their production is the subject of ongoing discussion. What is less explored is the different types of glandular trichomes, there unique composition and contribution to medicinal value. 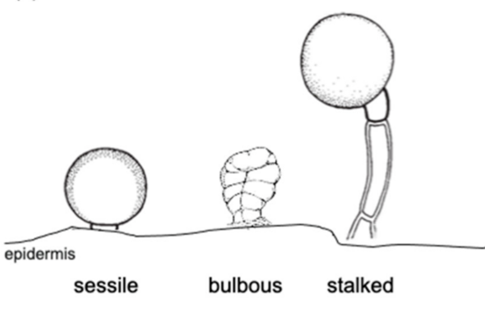 Bulbous trichomes are the smallest of the resin glands found on the cannabis plant, measuring just 20 micrometers in length. Invisible to the naked eye, bulbous trichomes are found on stems, leaves and to a lesser extent flowers. They comprise of a tiny stalk and gland head, with the ability to synthesize cannabinoids and terpenes. As these gland heads fill with oil they swell to form a bulbous growth, from which the trichome derives its name.

There are theories that bulbous trichomes contribute to CBGa production, the acidic precursor for CBG which breaks down to form CBDa and the much-revered THCa. As bulbous trichomes are the first resin glands to turn amber, they are often used as an early indicator for harvesting.

Capitate-Sessile trichomes are much larger than bulbous trichomes, at roughly 75 micrometers in length, but are still barely visible to the naked eye. They tend to form as soon as plants transcend the seedling stage, around the three-week mark, appearing in abundance across flowers and leaves. As the gland heads fills with oil they often dwarf and hide the trichome’s stalk, so they appear flattened and globular.

The largest of the these are the antherial-sessile trichomes, which top 90 micrometers and are generally found on anthers and calyxes. Both types of sessile trichomes, relative to their size, contain significant amounts of cannabinoids and terpenes and are subsequently prized by cultivators. 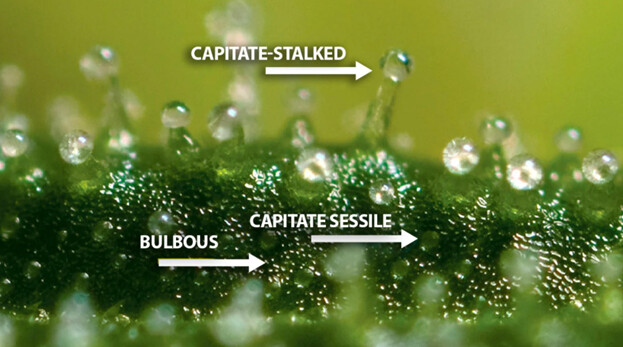 Measuring as much as 500 micrometers, capitate-stalked trichomes are visible to the naked eye and appear as an elongated stalk and spherical gland head. The trichomes appear in high concentrations during flowering, coating sugar leaves, bud sites and the buds themselves.

A powerhouse of cannabinoid and terpene production, capitate-stalked trichomes protrude from flowers the furthest and consequently are the most vulnerable to damage. This is particularly common in the final stages of flowering, when trichome heads bulge significantly and outgrow their stalk. 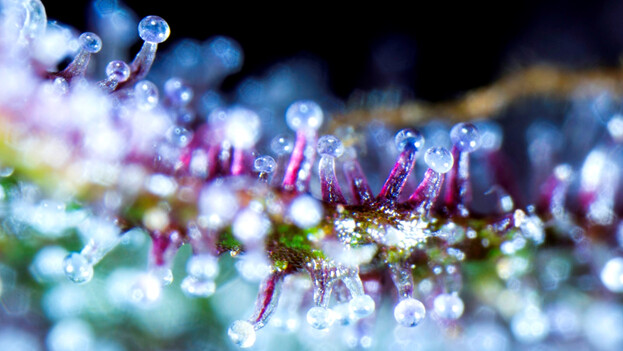 To protect fragile trichomes throughout cultivation and harvesting, intelligent growers minimize the physical contact each plant receives. This not only mitigates trichome deterioration and a loss of potency, but also the spread of contaminants and infections. Specialist solutions have been developed that benefit from FDA approved non-stick coatings, such as QuanTanium, to preserve trichomes in by preventing them from sticking to the surface of automated trimmers.

The industry leading trimmers also benefit from kief collection systems, which ensure any trichomes that detach are retained – whether they be bulbous, capitate-sessile or capitate-stalked. As all three glandular trichomes produce cannabinoids and terpenes, the ability to keep and process these is essential to maximize the harvest’s value.