Emerson effect and Exotic Booster board....best way to use OK I got this today at Rapid LED. I got the combo set Emerson effect and Exotic booster board combo with the heat-sinks. They come with a splitter and power supply, so I am set equipment wise.

So all you guys that are running far red supplemental lighting how do you do it? In other words do you run it all the time during flower, a couple of minutes each hour, I have seen and read several different methods including only running them for 10-15 minutes after the main light goes off.

Would appreciate some input on how you run them have you tried different ways and what works best.

Can’t provide any personal insight unfortunately but stoked to see when you incorporate them (and the results!), was looking at those and the Initiator Pucks they have! From what i’ve researched i’ve seen (like you said) either using just after lights off, or 15 min before lights on and 15 min after lights off.

Another grow I read was running supplements 15 before lights on plus 15 min after on (30 total in the morning), and then 15 min before lights off plus 15 after (30 total at night) and had great results in trichome production (don’t have the source, wish I saved

Me personally, I want to try running Emerson effect before and after lights off to initiate/increase photosynthetic rates (there are both light and dark photosynthetic pathways so I feel it’s beneficial to induce both), and supplement UV-A (1-2 hours) towards middle of lighting period to simulate the midday sun when UV rays are strongest.

Way I see it you’re already running awesome grows, these are only going to make your dank buds more dankilicious no matter how you run those supp boards

looking forward to seeing you experiment with your new toys!

Lol no problem I like long replies, short replies that basically have no real info in them are fustrating!!

I think initially I am going to go with about 10 minutes before and 10 minutes after lights off, and try to raise my light on time by another hour or two 13-14 on with the initiator of 10 after lights off and see if it works.
@preybird @TheMadFlascher @Hydro @oldtimer1951 @mudman @repins12 @LoCoRocK And of course anyone else that wanders in and all those I can’t remember their handle lol. ! Much appreciated the more help the merrier !

Isn’t emerson effect a band name…
Looks around. Where am I??? Lol no help here neither.

Ok that is basically what I read too. The Rapid LED website says run them the entire lights on time, and that didn’t go with everything I had read about this effect.

And you are saying leave em off during main lights on and just 3-10 minutes directly after lights off. That is real close to what I read too. Also my Spider light already has a very small amount of far red and UV diodes that will run all the time now anyway because I don’t have spectrum control on my lights. Thanks!!

Do you have the UVA-b and IR boards? I was thinking just use both for the 10 minutes after main light shut off.

Nope not yet. Hlg has those far red bulbs @hellraiser uses them but there always out of stock

Haven’t looked maybe they have them now

No they don’t have been on a notify list for a while now, gave up and just got the boards from Rapid LED. I can run the far red and the UVA IR at the same time or one or the other. They include a power supply but it powers both boards on a splitter so can’t do anything except run one or both on a timer. My only concern is screwing up the Emerson effect if I run both.

I run far red and deep red and uvA the whole life cycle. There part of my boards. They have 5500k white, Deep Red, far red and Uv.

I hear ya, have that in my Spider Farmer light as well. But not in the amount that these specialty boards put out. And apparently the Emerson effect has something to do with turning on and off a biological switch in the cells of the plant that make it go to sleep in minutes rather than the two hours it normally takes for the plant to switch over so you can run your light cycle one to two hours longer if you bathe them in far red after the white lights are not on. I’m thinking I may just buy another power supply and run the IR UVA separate of the Far red. I have timers laying everywhere so not a problem on that.

Im very aware of how it works. But i built this light its no spider farmer. I just dont run reds only. Now my Foshe light has this setting built in. Its does spring, summer, autumn light modes. And has sun up and sun set settings on adjustable timers. Plus overcast settings to simulate cloud cover. But that is a ridiculous costing light. The Aries By Fohse - Homegrow LED Grow Light – Fohse LED Grow Lights
(But nothing is better)
@hellraiser is testing this @xgx13xgx what do think? 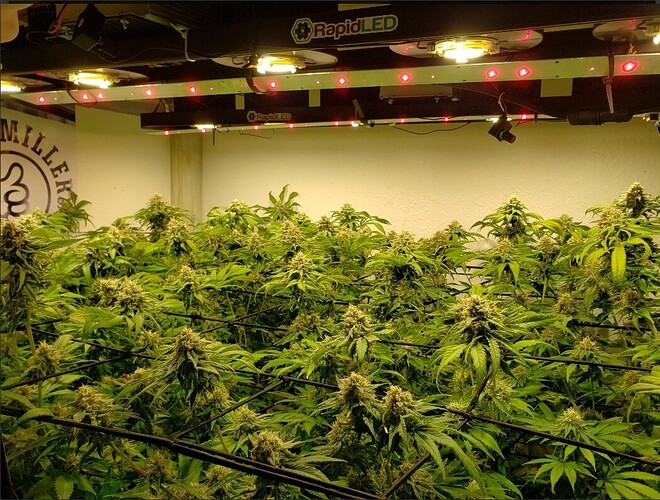 Are those the Rapid LED boards? And if so which ones? They make the Emerson effect (far red) and the one they call the Exotic booster board which is a UVA IR board. I bought one of each in a set you can select both the same or one of each (which is what I got). What I am trying to figure out is if I should run both of them after main lights out for 10 minutes or if the UVA IR board will mess up the far red Emerson effect?

I only see red emitters so those are likely only Emerson boards.

You sent me on a mission with this one lol! I still have the same feeling…the red drop (Emerson) increases photosynthetic rates in photosystems I and II (we call “light reactions”…these produce the plants energy). Instead of normal “biological” photosynthetic rates, these supplemental boards in theory ramp the rates up to max so your plants produce a ton of energy for growth and repair.

UV-A (and UV-B) is known to inhibit photosystem II and thus decrease photosynthetic rates. Plants go into “defense” mode and ramp up their “dark reactions” (sugar production, uses up the energy from the “light reactions”).

Found this article, but their model was in lettuce (you’ll have to Google it, and the full article is locked): “Preillumination of lettuce seedlings with red light enhances the resistance of photosynthetic apparatus to UV-A”.

The title of the article kinda self explains their findings. So this would suggest maybe running Emerson first and then switching on the Exotic Booster may desensitize the plants to the UV exposure, which you could progressively run longer.

Again, my conflict is why run two things that seem to want to combat each other? If Emerson increases the rates and UV-A inhibits, the only benefit I could see there would be enhanced UV resistance.

Sorry again for lack of brevity, I love science so I nerd out sometimes…didn’t mean to drop a plant bio lesson, just figured leave what I learn for anyone who is interested and stumbles on it (i’ve learned so much in a few months from the gems dropped on this forum). You all on here know lights and grow routines too damn well for my opinions to be worth two turd nuggets

Well from what I gleaned on here…and I ain’t no science nerd lol…is that the UV light enhances the terpene and trichome production along with increasing resin amount. (defense) And the far red Emerson effect causes the plants to flower quicker, and allows a shorter night cycle so more light on time and less time from onset to end of flower. Don’t know if I have that right or not.

That’s where I personally think UV middle of light period would be best…the plant has been photosynthesizing for hours at that point. A blast of UV midday to decrease “light reaction” rates so the plants can use some of their energy up, then once UV is off ramp up photosynthesis (maybe hit with Emerson board right after UV off?) so the plants can produce more energy to use during lights out.