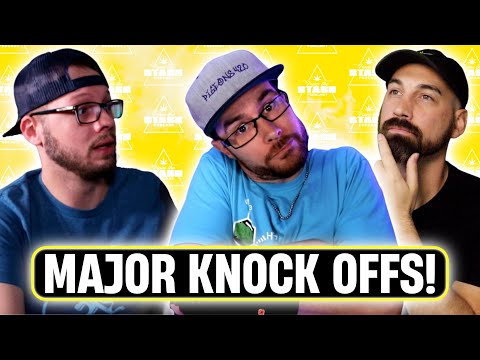 Today is a good day.
Shout out to Humboldt Seed Co. ! 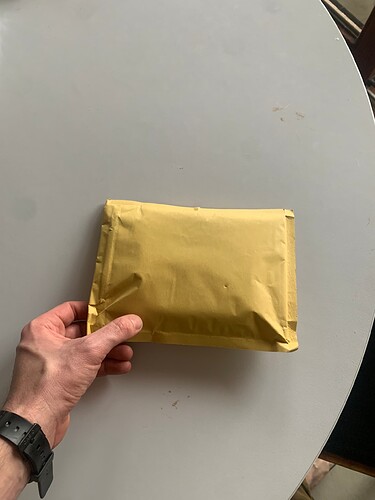 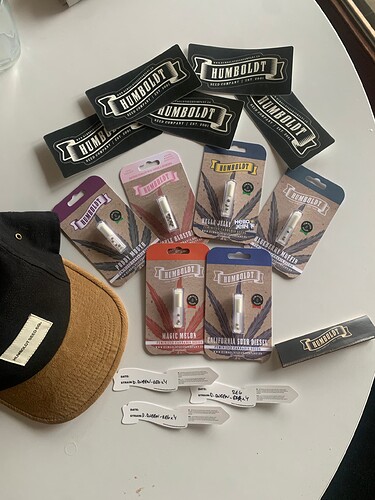 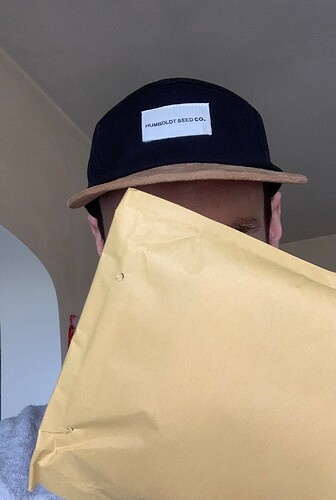 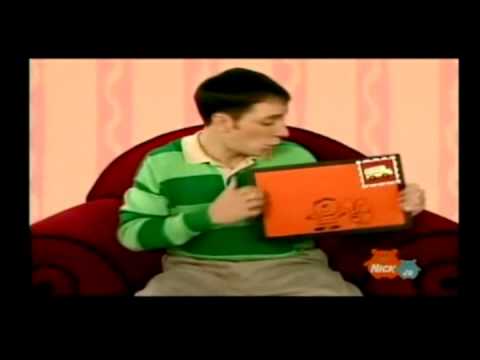 other times not so much

They also added a couple of their ‘scratch & sniff’ cards in the envelope. Didn’t notice em at first, almost threw em out. 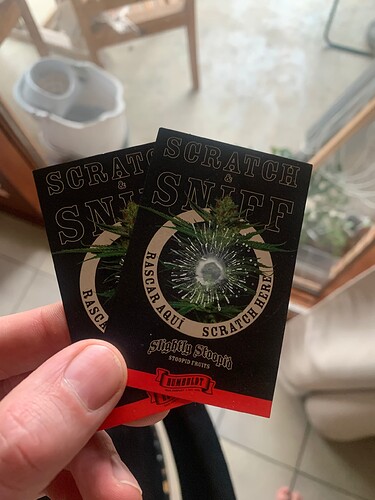 When you scratch em, you release the terpenes and you can smell the strain. These are from Slightly Stoopid. 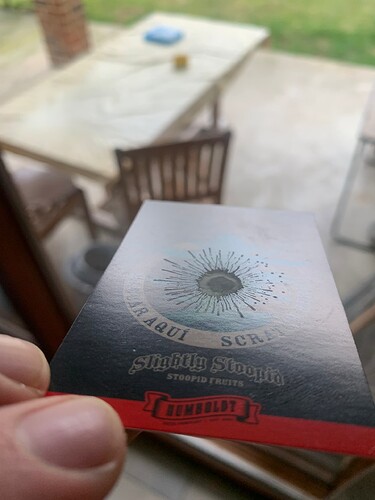 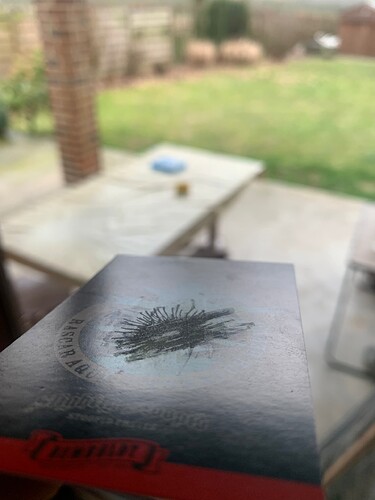 I have some slightly stupid Seeds. I was planning on starting a few pretty soon.

I have some slightly stupid Seeds.

Gonna tag along on this one, I received a pack from a pal who quit growing.

According to these scratch n sniff cards it smells straight up like pine. With a little whiff of eucalypt. @happilyretired @Dog_Fart1

2 days later scratched rigjt thru with a big hole in da Middle.

Had to throw em in the stove because I kept sniffing em yeah!

This is a good read

You cannot see it anymore but with an atavistic certainty you know that the helicopter is still shadowing you. Its blades thumping at a distance, carving a yawning hole in the sky above. Piercing through the thickening darkness, its electronic eyes stay unwavering, feverishly glowing red on the hunt for you. 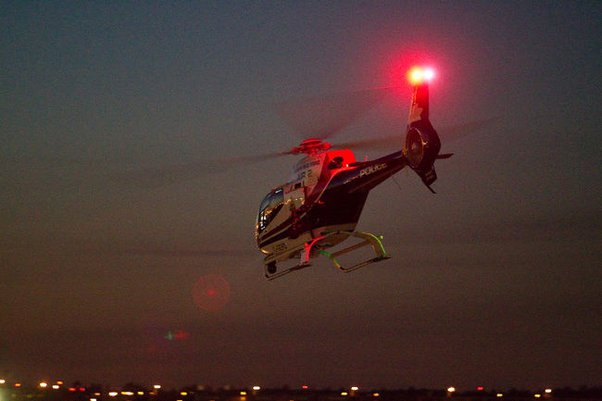 What is the best way to evade a police helicopter?

Are you worried that you are going to be wrongfully accused of something you had nothing to do with? Were you demonstrating against the steamrolling globalization and the oppressive forces of the economic oligarchy are on your tail?

Don’t worry, brother, I got your back.

This is what Neuroscience, studying human nature and more than thirty years of reading good fiction taught me:

If on foot, walk (do not run) into a shopping-mall; if in a car, drive slowly into the underground parking of one and park it in the first spot you can find. Your heat signature will be mixed with those of the other people there and the helicopter will lose you in the crowd. So now you only have the ground forces to deal with.

Your ultimate goal is to get away clean, without leaving behind any evidence that could physically tie you to the location you were followed at.

First thing, walk into a bathroom, pushing the door with your elbow or knuckles. From now on you will be aware of leaving fingerprints, so keep your fingers closed - if you have to pull open a door, make a fist and use the back of your thumb. Enter a stall and instantly erase everything from your phone by doing a Factory Data Reset. That should take 40–60 seconds. Unless yours is a sterile phone (and if you have to ask, trust me, it is not), remove your SIM card and any SD Memory cards, break them in half and flush them down, twice (most public toilets do a backwash to save water). Now, turn your phone back ON, wipe it and “forget it” in a bathroom stall. Someone is bound to nick it in a few minutes. The police probably are amassing the unique IMEI numbers every cellphone transmits from the area and they will be paying close attention to any units that suddenly went and stayed dark. Any other electronic device, especially if they have WiFi capability, turn them off, wipe them for prints and throw them in the trash (do not try to flush them down, they float).

The immediate aim right now is to alter the colour and shape of your appearance for the next few minutes. So, before you exit the bathroom: if you had been wearing a jacket, remove it; if you had a hat, lose it; if you have been carrying a sweater in your backpack, wear it over your T-shirt. More importantly, if you have anything incriminating in your backpack, now is the time to wipe it down thoroughly and throw in the trash - if the cleaners have left their trolley, use their trash bag instead (it will get emptied sooner). And from now on carry your backpack like a handbag, not on your back. The helicopter has been neutralized but it certainly signaled ground forces, probably providing them with your rough description, and they are only minutes away.

Now, go directly to a department store and purchase a different set of clothes. Unless your have an unusual haircut, avoid buying a hat if you did not have one: hats breed suspicion. Choose bland colours and nothing flashy. A preppy look is highly recommended: beige chinos and a sky-blue button-down oxford shirt. And do not forget the shoes - ditch the sneakers or sandals for some penny-loafers. The reason for this, will become obvious in a moment.

Avoid paying for everything at the same cashier. If you were not pressed for time I would even suggest changing stores - but not today. However, do take care for the clothes to fit you properly, so stick to brands you know. And do not forget to remove all store tags once paid for.

Obviously, use exclusively cash. If short on cash, decide to change only your outer layer - but in this case the objective is to slim down, not bulk up. A guy in a trench-coat will attract closer scrutiny.

You cannot get rid of your old clothes just yet. They carry a lot of physical evidence against you. So, carefully fold them up, place them into store shopping bags and take them with you. You will ditch them later. If you had a backpack, place it also in a shopping bag and carry it with you. So far, you were just an ordinary shopper. In a while this is going to change once more.

Remember to keep your head down (not to offer security cameras a full picture of your face) and make minimal contact with anyone but do walk with your shoulders squared up. Be calm, do not be hasty and behave as if you belong.

Now, find a flower shop and buy a single long-stemmed rose. Then, go down to the food court and have something to eat. You have been operating on an adrenaline high for some time now so you need to replenish your energy. It will be some time before you shall get the chance to eat again. Also, eating tricks our mind into calming down: animals do not eat when in danger. Avoid caffeine though, you are jumpy enough as it is.

So, try to relax, the worst is probably over. Leave the rose on the table in front of you. Do not look around when the police teams come in investigating. You may be curious at them but neither allow yourself to be jittery nor fake indifference. You are dressed up, had been shopping, and now just waiting for your sweetheart: that is the narrative you are projecting now. That is why you needed the preppy look. Your “girlfriend” is obviously late and you are worried for her in all this commotion - and this could also explain your nervousness. Use it to your advantage if challenged:

Are we… are we in any danger, officer?

If questioned, have a simple story prepared and stick to it. Make sure it is as close to the truth as possible, otherwise you might contradict yourself. If not, remain silent. When unprompted, people tend to fill in the gaps in a way that confirms their initial impressions. Do not get cocky, do not be cheeky. You are not out of the woods just yet. If the mall is ordered in a controlled evacuation, drop the rose in the bag containing the most dirty of your old clothes (so that, if inspected, the gaze of the officer will linger on the flower and miss the worn clothes) and make sure to be at the end of the first half of the people. That is when the underpaid security officers are more likely to let people go by faster because they see that they are only halfway done. Laziness is the only human trait one can reliably bet on and come on top more often than not.

If you arrived in your own car, leave it. Do not even go near it. Its plates and time of entry have been recorded. Not to worry, you are not losing it. Once outside, try to be polite and ask either a young man or an elderly couple for a ride. Avoid lone women and families, they will be more cautious and they might remember you afterwards. Alternatively, walk slowly to the cab stand or the bus stop but do try to be in a crowd, do not stand out. Have them take you to the next closest mall - that is where you wife/mother is supposed to be waiting for you yet you lost your cell phone in all the commotion.

And what was that all about, that was crazy, right?

During the ride do not look around, be courteous, and agree with the opinions expressed by your hosts. You should not care even if they lie on the very extreme opposite of the political spectrum. This is not the time for politics - it is the time to insert yourself on their side. This last part is important, you want them to consider you part of their tribe: they might unwittingly protect you if questioned. However, do not overplay your hand, do not drop your guard and under no circumstances allow any real information about yourself to slip out.

Once there, thank them politely and go inside. Have a 10 minute walk, go in and out of a few stores and then go back outside to catch another cab or bus near (but not at) your destination. You are still carrying your old clothes in new shopping bags. During this ride make sure than no personal items are still in those pockets. Get out four or five blocks before your destination. Start distributing your old clothes, one article at a time, to homeless persons; they will be put to good use and, at the same time, they will effectively disappear.

The next day do not forget to report your car stolen and your cellphone lost.

And from now on, try to stay out of trouble.

The sun is just edging over the sea when the rotors come to a stop. The tarmac still wet from last night’s dew, the helicopter’s canopy beaded in the cold morning air. The pilot, a Desert Storm veteran, shakes his head in resignation as he pulls and detaches the com lines from his helmet.

“You don’t win them all”, he mutters under his breath.

“Damn it, you can never win them all…” Running into a subway is not a good idea: you are trapping yourself in a space with limited egress and filled with cameras and security personnel.

Heading for an airport (police helicopters are not readily allowed in the airspace of commercial airports) is even worse: you lose the helicopter but have to deal with a multitude of security surveillance as well as well trained (not to mention even better armed) personnel.

Finally, if, you did commit a crime, especially a violent one, it would be better for you to get your affairs in order, find a good lawyer and within 24 hours turn yourself in. It would ruin your life to live like this for ever.

Mac and Jay? Is that mac1 and? Sounds good, i wonder if the Jay part will put me to sleep even more than the mac1

“The original breeder of the Super Boof strain is California’s Blockhead, who named it “Blockberry.” Grower Mobile Jay selected a variety and named it Superboof.”

I will read this later in bed but a good way to evade a police helicopter is to go to prison, they will never look for you there