I think it’s early enough in the season that the light level is ok. You’re probably right about the water. I’d say drop shake it to get excess water out but that’s a cloth pot so it might hurt the roots and you don’t want to add trauma to trauma lol

Just thinking, if you set it on cardboard that’ll help draw moisture out a little quicker.

Thanks for the input. I have that cloth pot sitting on a paper bag now to help draw moisture out of the bottom. 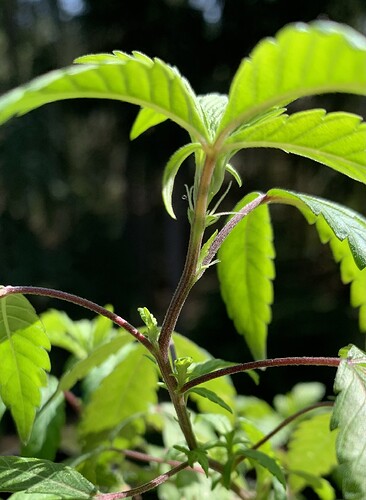 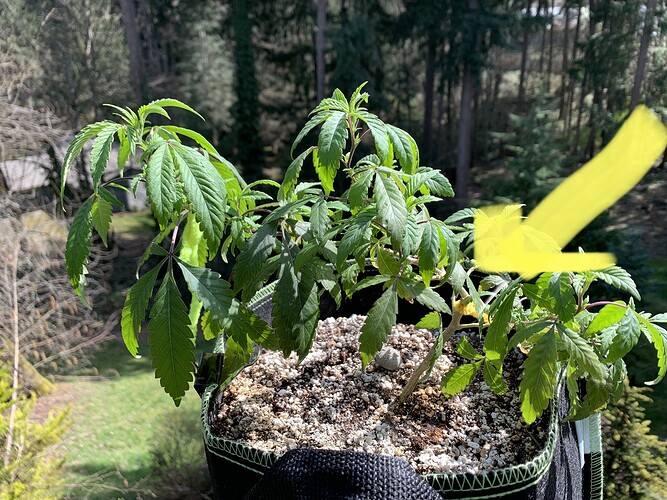 I think she might be kinda droopy because I kinda cracked her main stem. 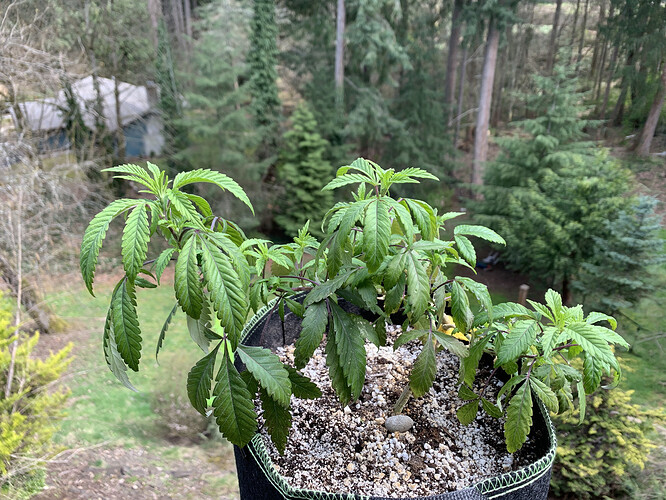 This damn plant makin me mad.

Why so droopy still?

If you haven’t been over or under watering then I’m going to suggest checking ph of water and runoff.

over or under watering

I’m 99% sure that it’s because I ignored her on my counter for 8 months, transplanted her into FFOF, then started messing with her, training her, broke a branch off accidentally…

Also when I transplanted her, it was clear to see she was root bound.

Her stem and branches have gotten visibly larger since transplant. She developed more leafy growth. I think it’s just taking her time to get her roots going again. 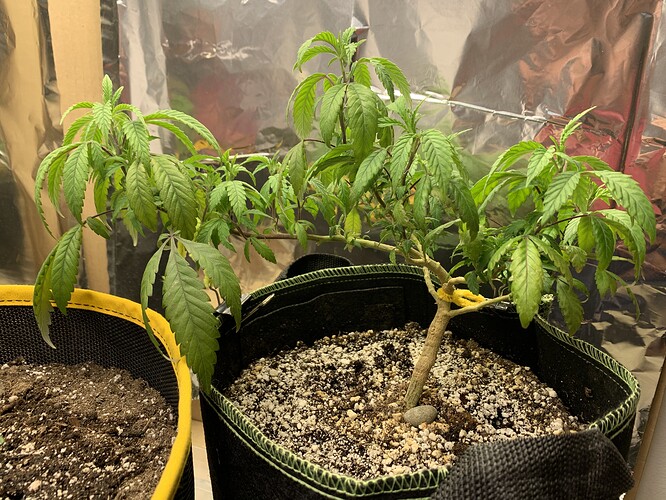 I’m sure everything will work out fine in the end.

Posted in the wrong thread:

Wash is getting trained also. One or two of these branches will be cloned and kept on my counter for the next time I grow a Wash. 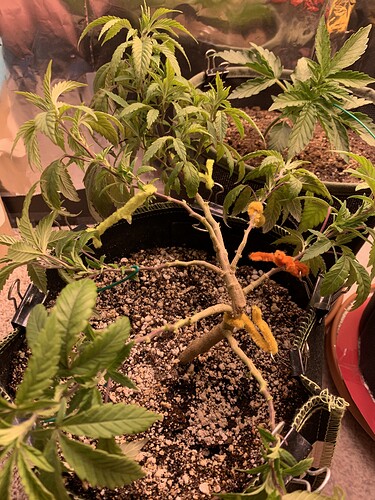 You can see that break from the first time I tried training her.

I spaced a few of her branches out a little more. 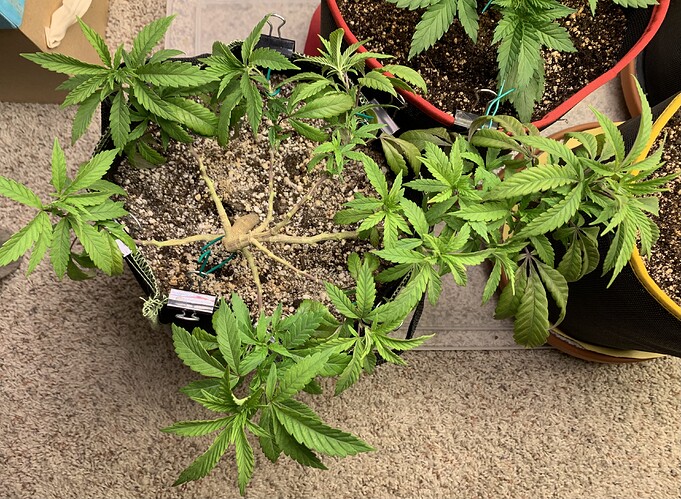 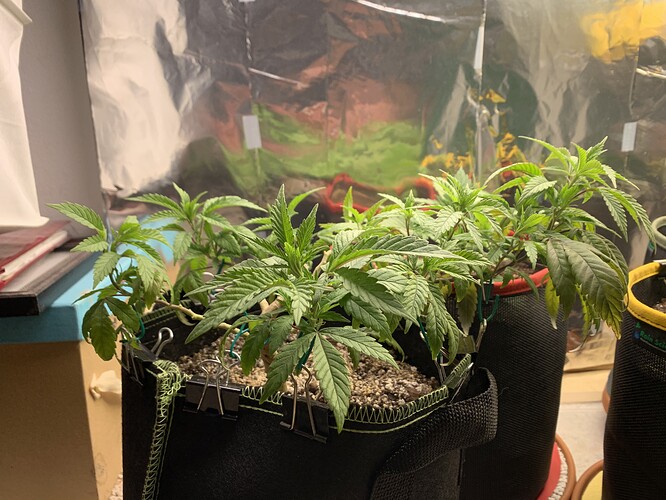 Now everyone is inside for the night. 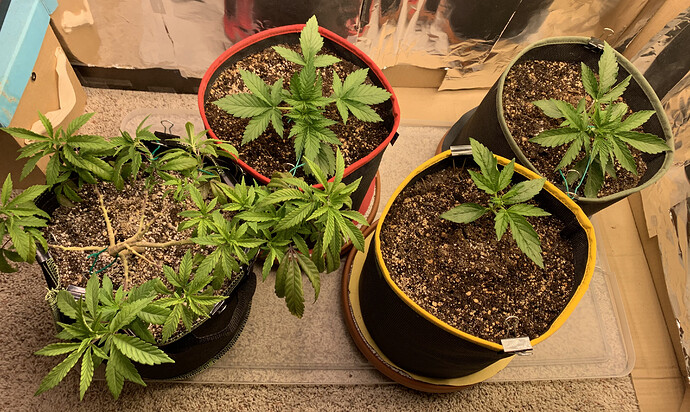 Sub’d, cool to watch the progression of your clone.
If I ever crack or even break a branch almost cleanly off, I just bust out the electrical tape, and she’ll come around bigger and better than before.

I once knew the old time pot grower, and the 1st time he took me to his patch, he said watch this, the plants would be a foot and a half to 2 feet tall, and he would grab them, bend them over and step on them, and you would here a loud crack, he did this to all his plants in the patch as I watched in pure horror. He looked at me and smiled and said “these little bitches love to be abused” I was actually stund, I couldn’t believe what I saw. I thought this dude was bat shit crazy.
He invited me back a month later, I expected to see a bunch of dead plants, with maybe a leaf or 2 still trying to cling to life, but to my amazement the place was full of some of the most robust plants I’d ever seen, with stalks and main branches as big as my forearm…

Sorry a little long winded there, but the moral of the story is they are some damn tough plants.

“these little bitches love to be abused”

And @bow4buck has a pic somewhere of one of his plants last summer that was SMASHED FLAT into like 5 or 6 pieces, and damn if it didn’t grow back after he taped it back up. It was pretty incredible.

I didn’t do anything or tape up this break, mostly because it was a slow break and I was mad at myself. I somehow managed to twist the hell out of this plant on my last grow like this. 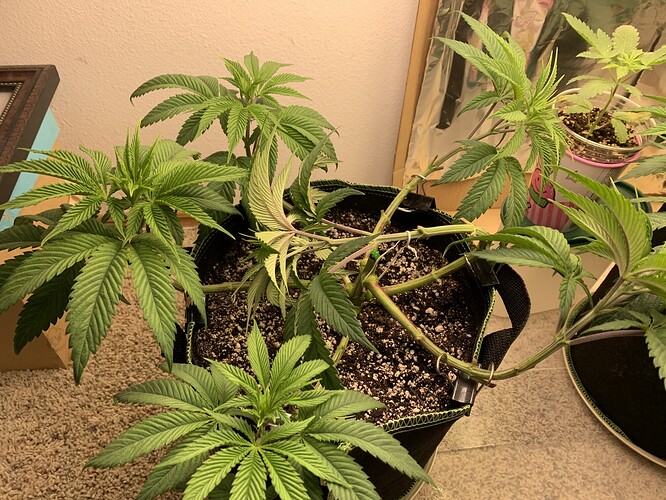 But not this time. lol!

I find it’s best to do training when the plant is fairly dry, they are more flimsy than when fully watered, and tend to snap more often because they’re much more ridged then

Love showing that pic. Thought it was a disaster in start of flower. 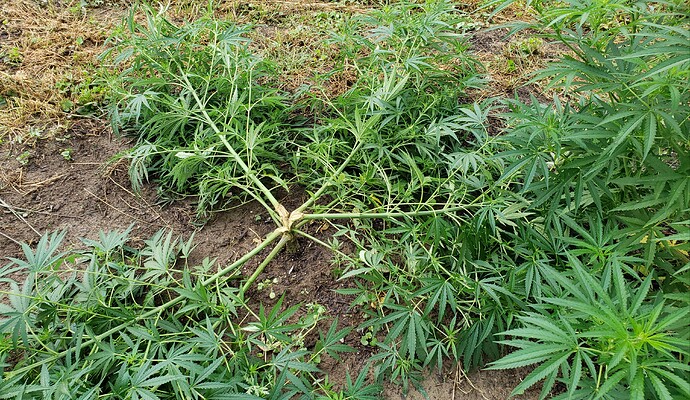 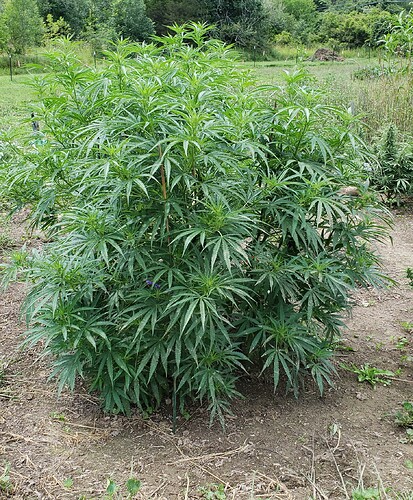 Managed a lil over a lb when she was done 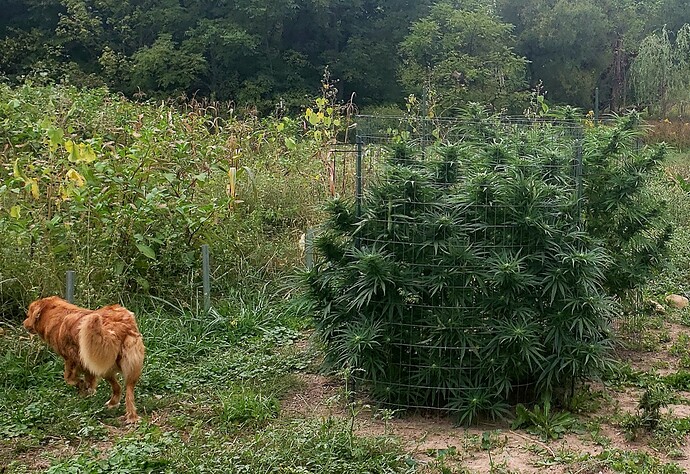 That’s what I mean, it’s pretty damn hard to kill these plants, tough as nails.
Awesome pic by the way, thanks for sharing it.

I’ve been under-watering this one. Poor thing. I was holding off because I thought I was over-watering her. But I gave her 3 cups of water (with mag) the day before yesterday and she felt light again this morning, so she got 3 more. I think she’s looking a lot better, but not as green as I’d like her to be. 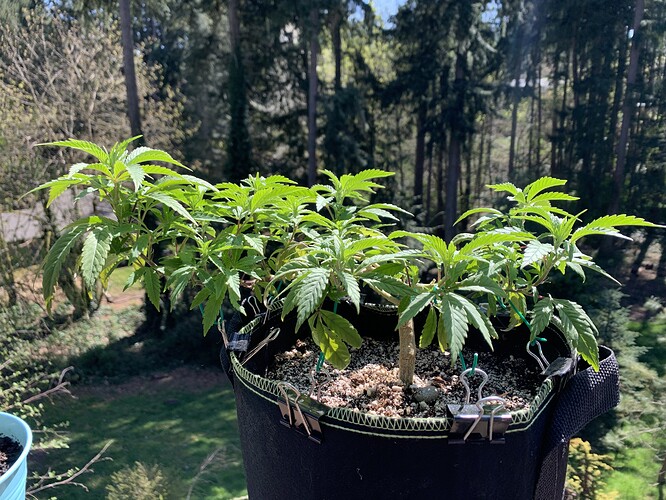 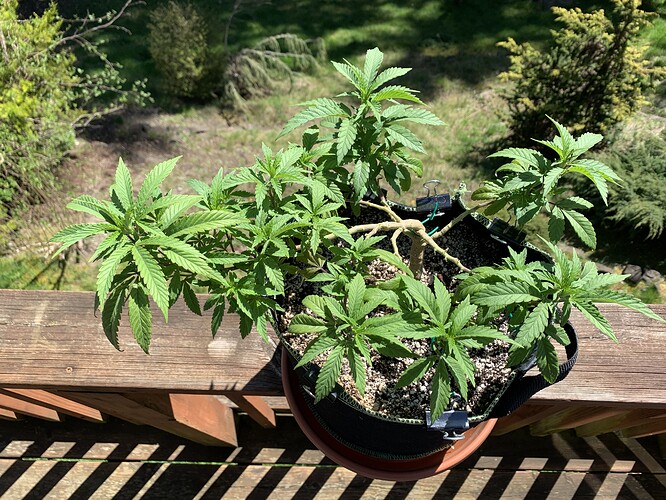 I’m starting her on Jacks321 this upcoming week.

She got her first hit of Jacks321 this morning. 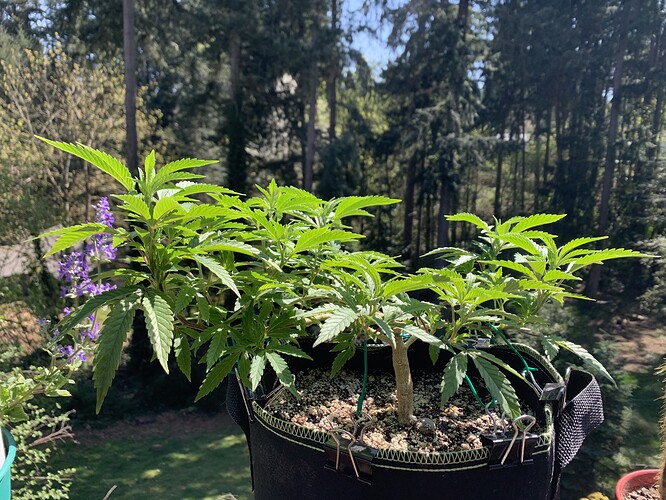 As of tonight, Rae is no longer the last Wash clone. 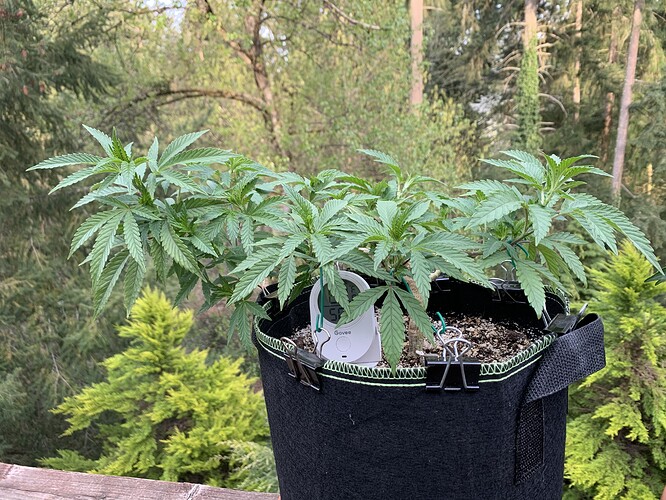 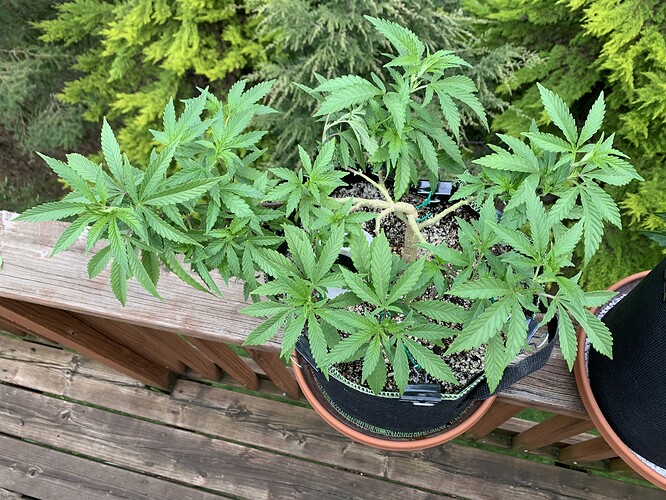 This here is how I clone.

I found a branch that I thought looked good. 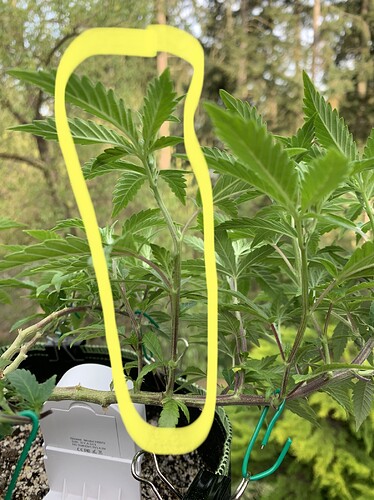 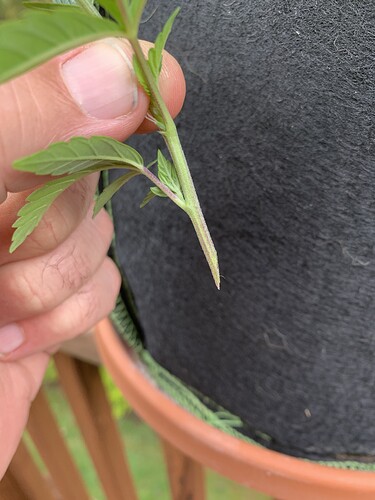 …meanwhile, I had a clear cup that I cut holes in the bottom of. 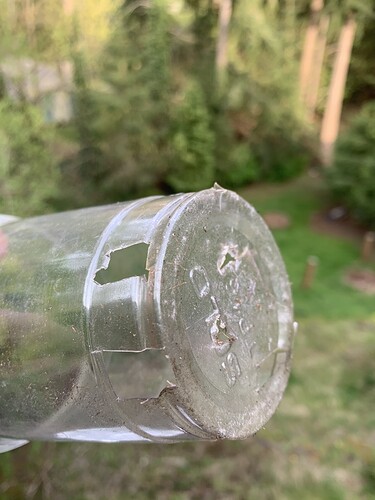 I wrapped the clear cup in aluminum foil and placed it in the black cup. (Don’t hate on the Mariners. I know they suck. But they’re my team.) 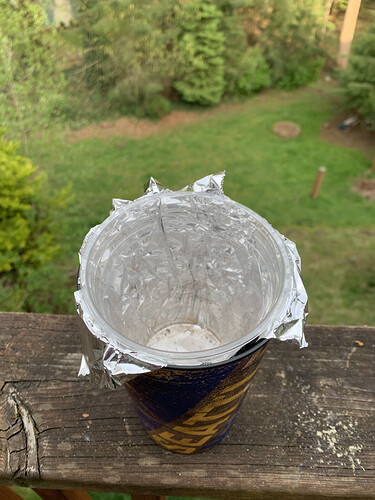 I filled the clear cup with a neutral growing mix (I use sunshine #4, available at HD) and wet it until water comes out of the bottom. Then I poke it with a stick. 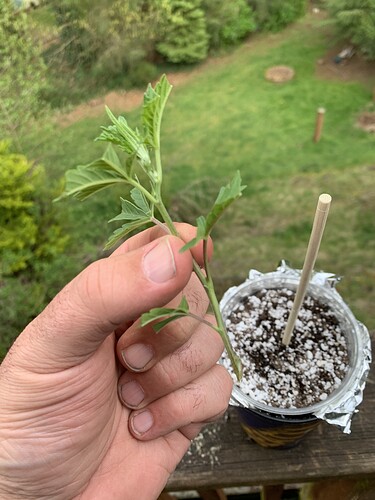 I put a little glob of aloe on the cut area (and on the plant where I snipped), pull the stick out, and pop the clone in the hole.

I forgot to say that I also cut off 1/2 of all of the existing leaves. I also popped out the teensy new stems that were growing.

Then I popped the new clone into the hole and then barely cover the top of the hole that the stick made. 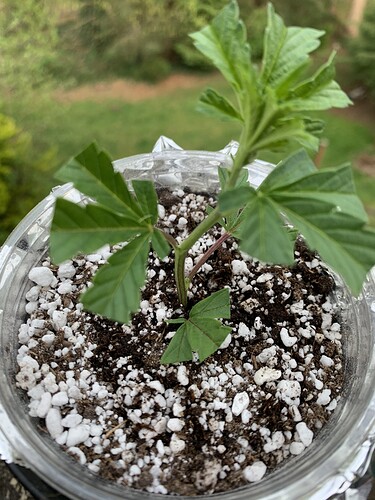 I then take out the foil liner. 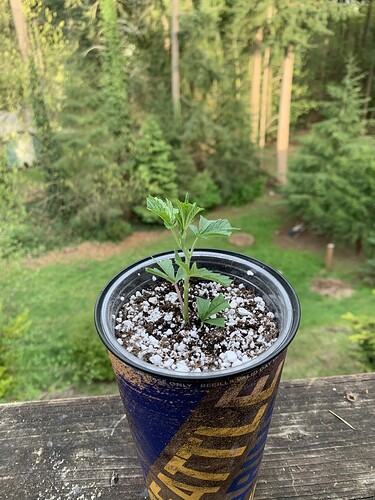 and put the clear cup back into the black cup. 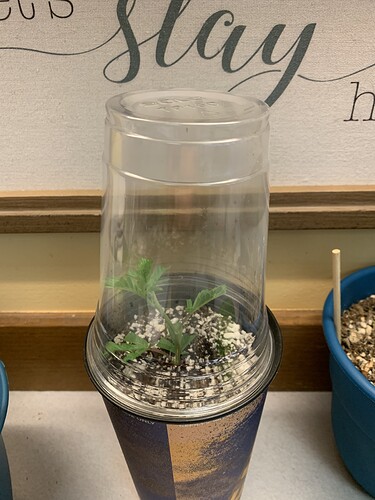 Then I put another clear cup over top of the clone and stick it on my kitchen counter under the cabinet lights. It’ll get 24/7 light while it’s in the kitchen.

Aside from that, I ignore the clone until I see signs of root growth or new leaves popping up.

When I see roots or new leaf growth (to indicate root growth that I can’t see), I’ll remove the cup/dome and start watering with a diluted nute mix.

This newest clone is Jessie.

LOL, have you ever tried walkin around with a cracked ‘stem’? OOOOOWWWWWWEEE!