Welcome to the Freakshow

HIgh Folks, Welcome to the Freakshow. This is the grow that will give you a good laugh or two while i throw crap at the wall hoping something sticks. I’ve been having some trouble withmy grow for the past few years. If it ain’t one thing it’s another. I have been running AN since before they switched to the pH Perfect formulation. I tell ya I so miss the old Sensi Bloom. one shot glass of Bloom A&B, 1.2 of each additive and I was getting hige yields of flavorful tasty day wrecking buds. Haven’t gotten that since they switched… So I’ll be trying out a couple new nutrient systems and still playing with the AN - mainly because I know other folks that are getting great results… Do me a favor, don’t suggest i use GH. I will not use General Hydroponics products, Gavita, Botanicare, or Hydrofarm because they sold out and are owned by Hawthorne Group, which is a shell company owned by Scotts/Monsanto. I won’t spend a dime knowing it’ll go to Scotts and I’m very disappointed in the families that sold out to them.

I run in coco coir (Canna) and dirt, but mainly in coco. I run 3K watts of lights in flower. The center piece of the flower room is a 4 foot cool tube, mounted vertically with a 1K watt Hortiluxe Super HPS in each end. This allows me to grow bigger plants and i have much less pruning and training to do since i get bids from the top colas to the bottom, when things are going right. I also invested in a decent COB LED from BC Blondes. It was a discontinued model and i got a good deal on it - ran me about $950 US shipped and it’s a beast of a light.

I have grown in hydro DWC buckets before. the problem i have with this is i live in a very old house and I always get slime growing in the reservoir. root rot plagues me in the dilapidated shithole of a house.

Veg room starts with 8 bulb 4 foot T5’s loaded with cheap Ushio HO plant bulbs with some Hortiluxe Powerveg UV bulbs for moms and clones. CLones get potted up and go under 2 LED’s, one is a Apollo 8 and the other is a Mars Hydro. I do like the Apollo 8 much better. It’s has UV and IR spectrums in it and i get very good root growth with this light. The Mars hydro is cheap and will be replaced by another Apollo 8 when i get another $300 to get one. When it comes to lights, I’ve learned you get what you pay for. The Apollo beats the Mars Hydro hands down.
here’s a link for the Apollo 8:

after the LED’s the plants are potted up and go under a 1K Hortiluxe MH in a XXXL air cooled hood, then to the flower room.

Blackberry Kush - clone only from Oregon. She literally gives me what we call juicy hits, where you toke and your mouth salivates and tastes like fresh blackberry juice with maybe some added Thyme. Nice chill buzz.

MK Ultra - TH Seeds. at 8 weeks this stuff makes me want to dance on the table tops for a few hours. Such a fun weird buzz that then gradually chills out to couchlock. At 9 .5 weeks she’ll have you staring at the wall…

91 Virginia Skunk - Jaws Genetics. This is a cross between 2 clones only 91 Virginia Skunks. Stuff makes me stagger like i’m drunk, Cuts through LSD. such a fun buzz you can actually feel when you’re tripping.

Hippy Slayer - phenotype of an old Bodhi strain (Dirty Hippy x Road Kill Skunk). Such a great weird fun buzz and this one cuts through LSD too. Stuff literally smells like a bus load of hippies after a week at Bonaroo - body odor and rotten fruit.

Fruity Pebbles OG F2 - Jaws Genetics. beautiful buds and the buzz tends to be on the heavier side.

Blueberry Yum Yum - Pacific Seeds. Admittedly, i bought this for the name, in hopes it would produce tasty Blueberry buds. The first one is in flower and has another few weeks to go. we shall see.

iCookies - not sure if this is a cross or phenotype of Girl Scout Cookies. This girl has been passed around and tightly held on another forum i belong to for years. I’ve had several folks tell me they feel high school high when they smoke it. It’s a very fun buzz.

1988 G13 Hashplant - These beans came from NDN by way of a mutual friend. I’ve has them for about 10 years and figured i’d better pop them and see what happens. I ened up with 3 babies that will be clones and sexed soon

Skywalker OG - this stuff is ridiculous. Last time i smoked this girl i couldn’t drive home.

Cinderella 99 - this girl is a cross of the original Brothers Grimm C99 - we call it the Grail Cut) and a Brothers Grim C99 f4 a friend sent me. I have one in flower at the moment and she smells like fresh passion fruit. Can;t wait to smoke her.

i think that’s it, although i might be forgetting something. I’ll try to get some pics up after i clean the rooms up a bit.

Very awesome to meet you Fs! I am Slym3r. Welcome to the network.

Use AN exclusively- hydro- great results

Well that about sums it up…lol you forgot what you had for dinner!

Very awesome indeed!!! Double strawberry Diesel sounds funky and I just saw strawberry Diesel for the 1st time last week, funny how that happens. I want to see some of these pics man. I’ve never seen a vertical center tube but it sounds effing killer. I saw you dabble earlier with slymr over on his pet project, he likes his mutant strains. Anyways bruh sounds like you got it going on man and what a line up. If it was a concert it be Woodstock… okay maybe not Woodstock…lol very nice to meet ya, welcome to GN, I’m gonna pull up a chair and watch this one out! Oh - hello my name is Loco and I’m a pothead! I’ve been sober now almost an hour

High @wrosnek. i wish i could do hydro. The problem is my house is over 100 years old. Lots of dirt in the walls, etc. Every time i try hydro i get slime on the roots. Doesn’t matter what i use, in fact i have 2 aquarium chillers to keep the solutions at optimum temps, I get slime.

As far as the Blackberry Kush goes, a good friend sent me this clone 8 years ago. She’s a magnesium hog, big time and a touch nute sensitive, but she makes some beautiful buds that are sooooooo tasty.

Glad to be here my friends. I got the night off work so i am hiopefull that i will get some pics posted tonight. My place is a bit of a mess and very ghetto so dont’ judge too harshly

ok i grabbed some pics. just have to edit them. It’s -15 degrees here so motivation has been nonexistent except to curl up with my dogs to keep warm…

ok got some pics up. The Heavy 16 trial has begun. I put 3 larger plants into the flower room yesterday, today is the first day of 12/12, that were fed the Heavy 16 grow, and I gave them their first dose of Heavy 16 Bud, with a touch of B52, Cal mag, Voodoo juice, Epsom Salts and Molasses.

The Heavy 16 plants are iCookies, Hippy Slayer, and a rather unruly and huge GG#4 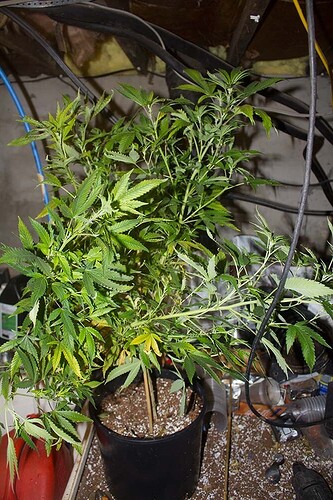 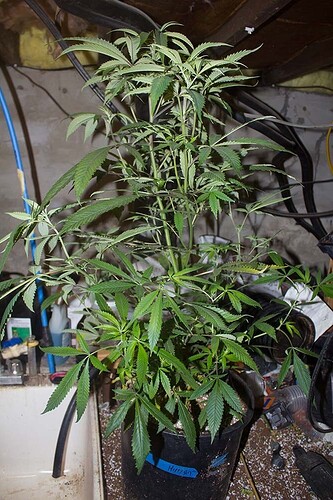 here’s some shots of the MK Ultra coming down today 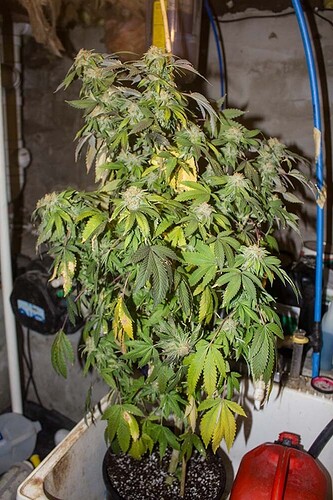 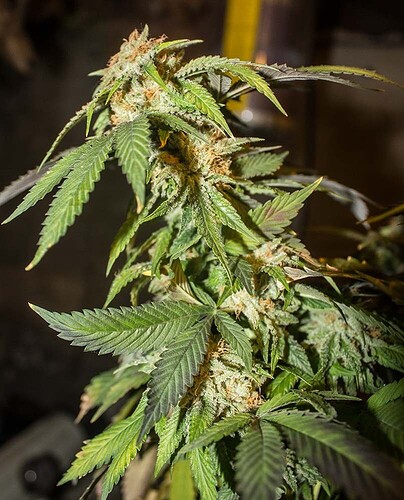 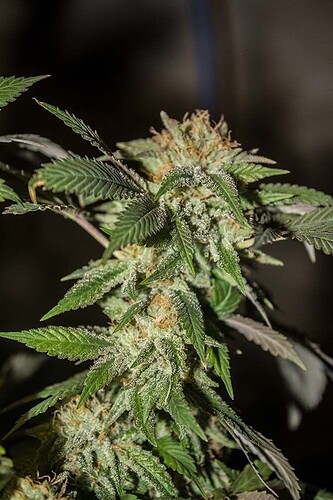 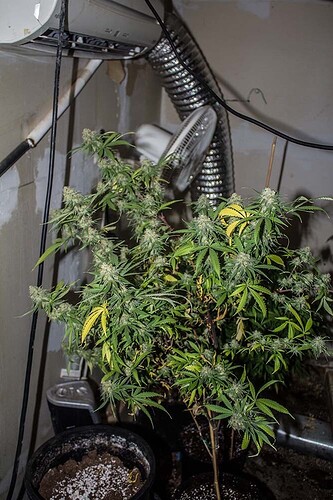 There’s also a couple pics of my lighting set up 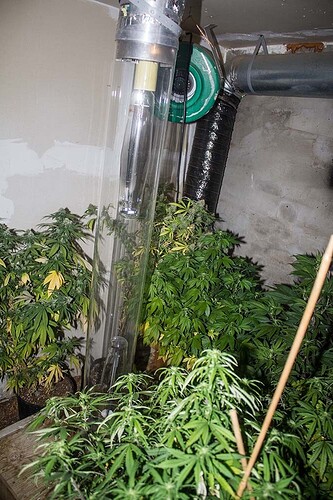 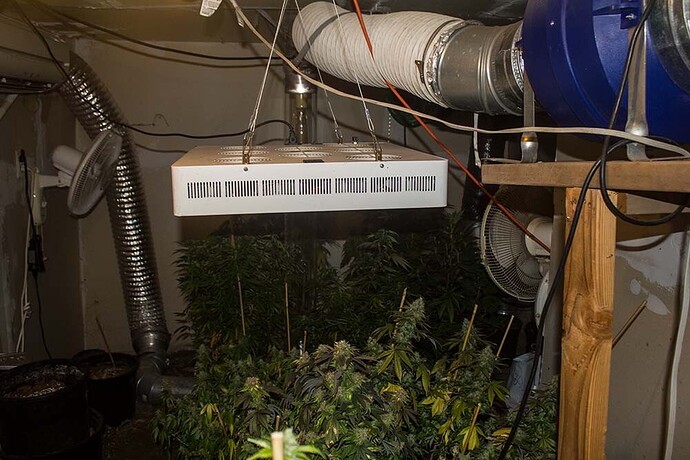 Looking good, like to know how that MK Ultra smokes. Have a few of those beans here. Dont think I’ve ever tried it that I know of

High @bow4buck, thanks for stopping by. MKUltra is some heavy duty stuff - OG Kush x G13. If you harvest right at 8 weeks she’s a lot of fun. Weird, up, makes me want to dance. At 9 weeks, she’ll have you couchlocked

trim trim trim… my back hurts

but i watched a fantastic documentary on Mussel Shoals last night. I highly recommend it to any music lover. Those musicians at Fame Recording Studios made a lot of people very very famous.

#trimjailsucks# …lol looking good, frosting up nicely… I chopped 2 this morning and 1 yesterday. I’ll be in jail in about week or so. Not looked forward to it… it’s part of the job though… the only part I don’t take absolute pleasure in. LoL

hate this old rat trap house. it’s literally falling into the ground, and my taxes keep going up…

bummer about the jail thing. what happened?

ah i gotcha. I used to sit for a week or two trimming until my back couldn’t take it any longer. I bought a spin pro and haven’t looked back. damn thing works great as long as you keep it clean.

a good friend sent me a small bottle of a supplement he wants me to try. It’s from Humboldt’s Secret, called Golden Tree. It sounds like a great product. anyone here tried it or using it?

Yes I use it… goes w my Humboldt nutes. Well it is recommended with it. 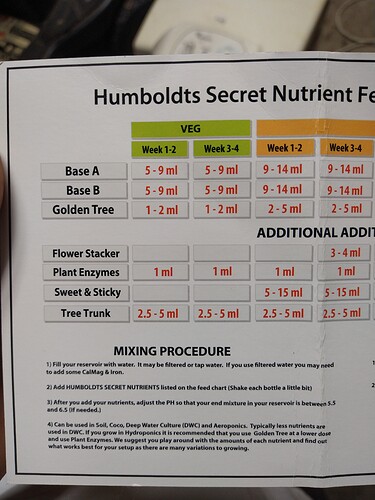 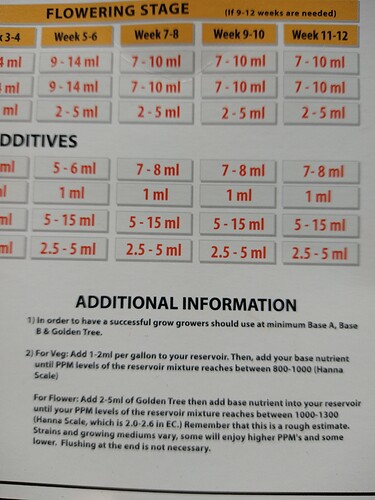 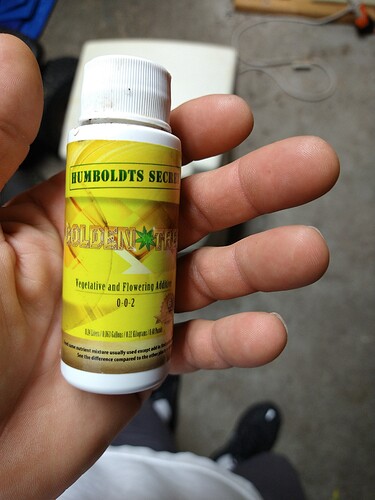